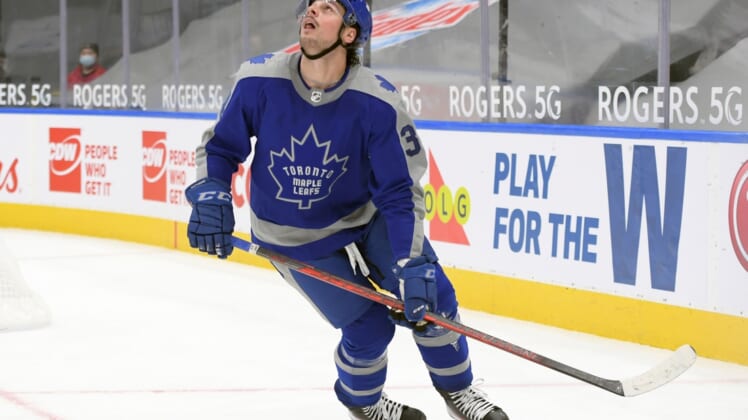 One of the NHL’s oldest rivalries will be renewed atop the North Division when the Toronto Maple Leafs visit the Montreal Canadiens on Wednesday night.

Toronto recorded a 5-4 overtime victory over Montreal in the season opener on Jan. 13. Since that meeting, the teams have risen to the top two spots in the division, with the Leafs three points ahead.

On paper, the two clubs are among the league’s elite — with the odd scheduling caveat that they have barely played each other. Nine games remain between the Leafs and Habs over the final three months of the regular season.

As good as the two Original Six rivals have looked for much of the season, they each enter Wednesday’s matchup looking to improve on subpar performances.

The Maple Leafs recorded their lowest shot total (19) of the season Monday against the Vancouver Canucks but still emerged with a 3-1 victory. Toronto has gone eight games (7-0-1) without a regulation loss.

“We really didn’t have any business being in that game,” said Auston Matthews, who scored the game-winning goal 9:22 into the third period.

“You’ve got to … as a team, learn to fight through these kinds of games where maybe the puck’s not bouncing your way or you don’t have your good legs that particular night,” Matthews said. “Just fight through and find a way, and that’s what we did tonight.”

Matthews has scored in eight consecutive games as part of a 10-game points streak. The star forward has 14 points (11 goals, three assists) over those 10 games.

The Canadiens return to action after a pair of difficult games against the last-place Ottawa Senators. Montreal suffered a 3-2 loss on home ice on Feb. 4 before defeating the Senators 2-1 on Feb. 6 in Ottawa.

Despite the victory, Habs coach Claude Julien described his team as “a very ordinary group” in its most recent outing.

“I didn’t think we played our best games against Ottawa,” Julien said. “I’d even say that our second game was worse (than the first game). We have talent and depth, but if our work ethic and our combativeness aren’t at a maximum, we’re just like any other team.”

The Habs also play Thursday against the Edmonton Oilers, so goalies Carey Price and Jake Allen are likely to split the two starts. Price likely will face Toronto because Allen started the most recent game, though Allen has played well enough (4-1-0 record, .940 save percentage) that it wouldn’t be surprising if he got the nod on Wednesday.

Price is off to a slow start by his normal standards, with a 4-1-2 record and an .899 save percentage through seven games.

Frederik Andersen also has been inconsistent over the season’s first month, but the Toronto goaltender has stopped 58 of 60 shots (.967 save percentage) over his past two games.

Montreal’s Jeff Petry and Josh Anderson have four goals apiece over their past four games. Anderson is riding a three-game scoring streak.