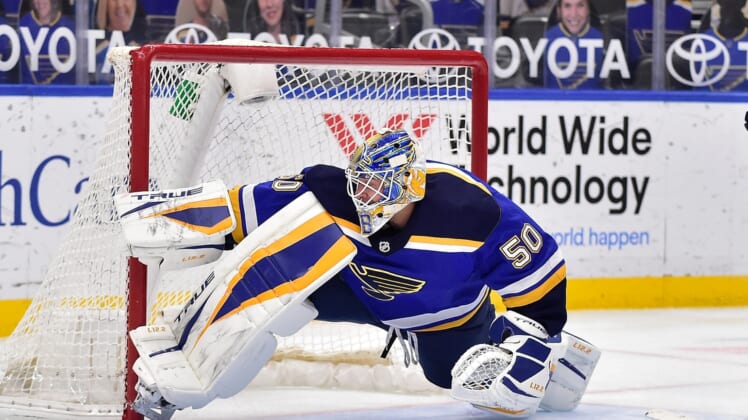 The St. Louis Blues will try to maintain their edge over the San Jose Sharks when they host them again Saturday.

The Blues edged the Sharks 3-2 in overtime Thursday night at Enterprise Center. They are 2-0-1 against them this season with a shootout loss and they are 7-0-1 in their last eight games against them dating to the 2019 playoffs.

But Thursday night’s game was a back-and-forth affair.

“I thought our first period was pretty good,” Blues coach Craig Berube said. “Our second period, no, not good. And then we woke up and I thought we had a good third and ended up tying it late and winning in overtime. Our guys stuck with it and did a good job.”

The Sharks led 2-1 after controlling the second period, but the Brayden Schenn tied the game with 40 seconds left and David Perron scored the winning power-play goal in overtime.

Martin Jones made 42 saves for the Sharks. In 12 regular season starts against the Blues in his career, Jones is 6-5-1 with a .921 save percentage and a 2.06 goals-against average.

Despite playing without injured offensive defenseman Erik Karlsson, the Sharks were able to attack the Blues with their transition game, getting goals from John Leonard and Noah Gregor.

“We were finding open spaces,” Gregor said. “We have guys that are smart hockey players and can find that open ice. Quite a few times, we were able to find those holes. We’ve got guys that if you give us the middle of the ice, we’re going to take it.”

At times, the Blues were able to apply pressure with their forechecking and sustained their time in the offensive zone by cycling the puck. But at times they didn’t.

“I don’t think we’re too happy with the performance that we had tonight,” Blues winger Mike Hoffman said. “Obviously the two points is nice, but we know we’ve got to be better, and we’ll come back to work tomorrow and go from there.”

The Blues took another injury hit when forward Ivan Barbashev left the game with an ankle injury, and Friday the team announced he was being placed on the injured reserve list and would be re-evaluated in six weeks.

Subtracting empty-net goals, the Blues have played eight consecutive one-goal games. Goaltender Jordan Binnington (8-3-2 with a 2.34 GAA and .919 save percentage) has kept them on track.

“Yeah, it’s pretty tight so far,” Binnington said. “You know, I can’t predict that. Every game any team can win, so we gotta bring our game and prepare the same way, stay composed and just keep pushing together and come together as a group.”