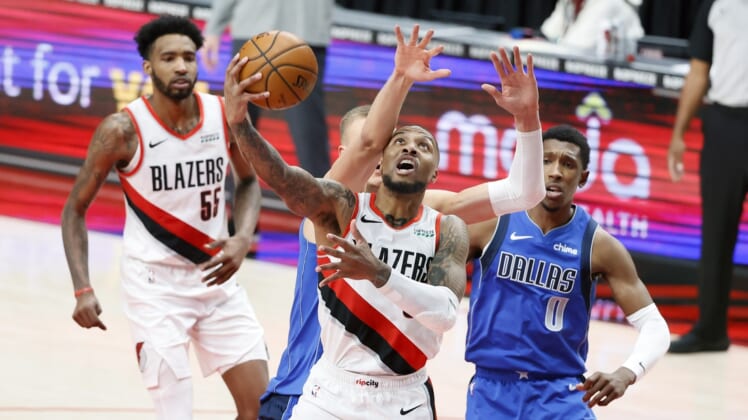 CJ McCollum has shaken off the rust and he looks to follow up a superb outing on Sunday night when the Portland Trail Blazers look to beat the visiting Dallas Mavericks for the second time in three nights.

McCollum made seven 3-pointers and poured in 32 points in his third game since returning from a fractured left foot as the Trail Blazers recorded a 125-119 win over the Mavericks on Friday night.

McCollum was off to the best start of his career with a 26.7 scoring average in 13 games prior to being injured against the Atlanta Hawks on Jan. 16.

He returned exactly two months after the injury and the first two games didn’t go so well. McCollum made just 6-of-27 shots and averaged 10.5 points while struggling to feel comfortable.

But on Friday night, the early season form was back.

“It feels good, I knew it was going to take some time,” McCollum said after playing 28 minutes in the triumph. “It takes time to kind of find your rhythm, especially in this type of season. I just had to be patient.”

Portland coach Terry Stotts said Friday’s version of McCollum was the one who scored 26 or more points on seven occasions prior to the injury.

“He looked like CJ,” Stotts said. “We kind of had him on a minutes restriction, otherwise who knows what he could have done. He had a good rhythm. I don’t anticipate a minutes restriction going forward. Seven of 13 from three, which is what he was doing before he got hurt. It was good to see for him and for us.”

Trail Blazers star Damian Lillard added 31 points and is averaging 38.8 points over the past four games, topped by his season-high 50-point effort against the New Orleans Pelicans on Tuesday.

Luka Doncic certainly isn’t the reason why Dallas is winless against Portland this season. He is averaging 41 points, nine assists and eight rebounds against the Trail Blazers.

Doncic was 15-of-27 from the field on Friday when he recorded 38 points, nine rebounds and nine assists.

While Tim Hardaway Jr. made seven 3-pointers and scored 25 points, main sidekick Kristaps Porzingis had just 11 points on 3-of-11 shooting.

It was the second straight 11-point effort for Porzingis, who is just 8-of-25 shooting during the stretch.

“He’s going to see a switching defense a lot of nights,” Mavericks coach Rick Carlisle said of Porzingis. “In those situations, he’s got to move and react, and we’ve got to find him in situations where he can be effective. He got off to a slow start and we just got to involve him a little more.”

Friday’s loss came in the first game of a stretch in which the Mavericks play eight of nine games on the road. Next Friday’s game against the Indiana Pacers is the lone one at home during the span.

Doncic looks ready to carry Dallas through the stretch after averaging 40 points over the past two games. But he will need some help on Sunday as the Mavericks try to slow Lillard and the now-revved-up McCollum.

“That’s his running mate,” Hardaway said of Lillard having his potent teammate back. “They do a great job of feeding off each other. And when Dame is out and CJ is in the game, that’s his time to go. That’s one of the best duos in the league.

“They made some tough shots. But that’s what they do. We have to do a better job of getting the ball out of their hands and make sure they don’t get it back.”