PREVIEW: No. 2 Houston, No. 10 Rutgers square off in Midwest Region match 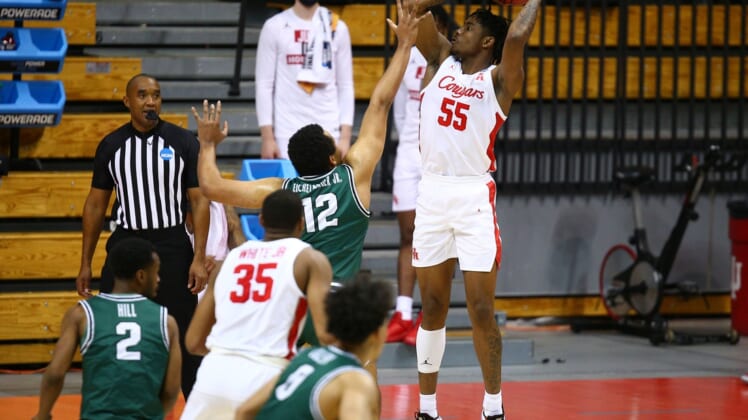 It required less than one minute of game action for the second-seeded Houston Cougars to face their first measure of adversity in this NCAA Tournament.

Senior DeJon Jarreau, unanimously described as the leader of the veteran Cougars, was lost to a right hip pointer and spent the remainder of the game rooting from the sideline with heating pads stuffed in his shorts. Without Jarreau spearheading their offense and defense — Jarreau was named American Athletic Conference Defensive Player of the Year — the Cougars (25-3) appeared to be a rudderless ship for most of the first half against Cleveland State.

But Houston found its footing during the intermission and returned for the second half of its first-round game at Assembly Hall in Bloomington, Ind., playing like a Final Four contender, rolling to an 87-56 win to set a date opposite Rutgers (16-11) on Sunday in the second round of Midwest Region play.

“We had to switch midstream. We had to change things up,” Houston coach Kelvin Sampson said. “I think once we got into halftime, we came out a lot more organized. During the course of the first half, I didn’t feel like we were as organized as we needed to be.”

Without Jarreau, ball-handling duties fell on the shoulders of Quentin Grimes and Marcus Sasser. Once stabilized, Grimes and Sasser combined for 32 points and seven assists.

Defensively, the Cougars limited Cleveland State to one field goal over the first 10 minutes of the second half. Houston also grabbed 16 offensive rebounds.

“Everybody knows DeJon is our leader, he’s our connector,” Grimes said. “He’s our coach that’s on the floor and when he (went) down … we had to make some adjustments defensively. And then once we knew that he wasn’t going to come back in the second half we kind of got in our flow, we knew what we were doing and what we had to execute offensively and defensively.”

Jarreau’s status for Sunday is unclear. But what Houston received in his absence, notably from forwards Reggie Chaney, Justin Gorham, Brison Gresham and Fabian White Jr., eased any frayed nerves.

“It really shows how many different weapons we have,” Grimes said. “Showing that we had a resiliency to still play how we usually play even though DeJon went down, everybody stepped up and took on a little bit more than they usually have. It showed that we’re a good, fighting team and can hold on when one man goes down.”

The 10th-seeded Scarlet Knights earned their first NCAA Tournament win since 1983 in their first appearance in 30 years by limiting seventh-seeded Clemson to one field goal over the final four minutes of a 60-56 victory on Friday. Geo Baker, Caleb McConnell and Jacob Young scored 13 points apiece to lead Rutgers, which anticipated a defensive-minded affair against the Tigers.

Rutgers finding the defensive gumption to stifle Clemson down the stretch underscored a prevailing desire to make an extended stay in the Midwest Region bracket. That it survived offensively despite getting just 10 points on 3-of-14 shooting from leading scorer Ron Harper Jr. proved that the moment wasn’t at all too big for the relatively inexperienced Scarlet Knights.

“I really liked our poise down the stretch,” Rutgers coach Steve Pikiell said.