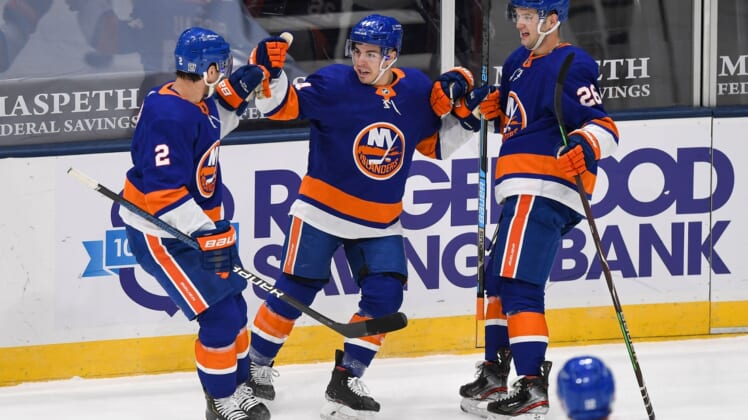 If the New York Islanders are looking for a way to extend their point streak to nine games, they might want to concentrate on shutting down the Penguins’ top line when the teams meet Thursday at Pittsburgh.

Precedent this season suggests that if the Islanders, 5-0-3 during their streak, can keep Pittsburgh’s Jake Guentzel, Sidney Crosby and Bryan Rust off the scoresheet, they will increase their chances at getting two points.

Those three members of the Penguins’ top line are Pittsburgh’s top three scorers. They were held without any points Tuesday in a 3-1 loss against Washington that left the Penguins 2-3 in their past five games, 3-4-1 in their past eight.

Some of that could be attributed to Pittsburgh taking four penalties in the second period, when the Capitals took control of the game. Washington didn’t get any power-play goals, but having to spend all that time short-handed meant Crosby and Co. spent more time on the bench than would be ideal.

But some of it also could be attributed to the Penguins’ overall lack of scoring depth.

“We need more guys to step up and make an impact on the game,” Pittsburgh coach Mike Sullivan said. “That’s how teams become teams in the truest sense of the word. Everybody needs to go into games thinking that they’re going to make a positive impact on the game in some way, shape or form. And sometimes that means scoring goals.

“When teams win consistently, usually the offense is spread throughout the lineup. They get timely goals from role players; then they get consistent play from their core. We just need to make sure we get more guys making a positive impact on the game.”

Zach Aston-Reese is doing his part. After offseason shoulder surgery, he has a goal in each of his first three games back, including the Penguins’ only goal Tuesday.

Aston-Reese pointed to the parade to the penalty box — something that has been a problem at times throughout the season — as an area the Penguins can rectify.

“It’s really tough,” he said. “We like to roll four lines and get everybody involved.

“When you have to shorten the bench and spend (time) on the kill, it takes the top guys off their game.”

While slowing Pittsburgh’s top line would seem to be a good defensive strategy, New York has found a sound approach offensively and overall — strong starts.

The Islanders have netted 19 of their 38 goals in the first period, an even half of them.

“Good preparation,” Pageau said. “I think everyone’s making sure they’re ready, and ready to do your role as best as you can. I think that’s why we always come out strong.”

While Pageau kept his goal string alive, Mathew Barzal was kept off the scoresheet Tuesday, ending his point streak at nine games.

The shutout Tuesday meant the Islanders have allowed 17 goals during their eight-game point streak, including three goals over the past three games. The stretch also includes going 1-0-1 against Pittsburgh.

It’s unclear whether Sorokin will make his fifth start Thursday against Pittsburgh coming off the shutout or whether the Islanders will go back to No. 1 goalie and workhorse Semyon Varlamov.