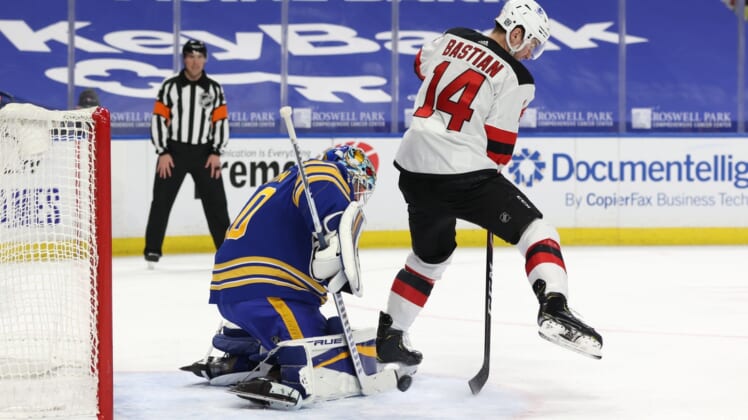 No team has been impacted more by COVID-19 schedule disruptions than the New Jersey Devils.

After two weeks away from the ice, the Devils will return to action on Tuesday night when they visit the New York Rangers.

The Devils are playing their first game since Miles Wood and Michael McLeod scored two goals apiece in a 5-3 win over the Buffalo Sabres on Jan. 31. Since the Devils snapped a three-game losing streak, they saw five contests postponed due to an increasing number of players on the NHL’s COVID-19 protocols.

“You just have to roll with what life hands you,” Wood said after the Devils practiced on Monday. “We’re not here looking for any excuse. It’s just the way this year has gone.”

The Devils had 19 players on the COVID-19 protocol at one point, and by Sunday that number had been reduced from 13 to five. The only players not to get cleared were Nico Hischier, Nikita Gusev, Nathan Bastian, Travis Zajac and Dmitri Kulikov.

Among the players getting cleared is goaltender Mackenzie Blackwood, who was among the first Devils to be placed on the COVID-19 list this season. He was placed on the list Jan. 21 shortly before a game with the New York Islanders, two days after he stopped 47 shots in a 4-3 win over the Rangers.

When the Devils played their last game, they had six players on the list — including Zajac and Kyle Palmieri, who said Monday that he tested positive and had symptoms for a few days. By Feb. 2, the total of players on the COVID-19 list swelled to 14 players, including Jack Hughes, who has eight points (three goals, five assists) this season and three (two goals, one assist) in the first meeting against the Rangers.

The Rangers have had two postponements, including their scheduled Feb. 6 game in New Jersey. They are on a three-game losing streak (0-2-1) and have been blanked in two of those games, including a 1-0 loss to the Boston Bruins on Friday.

New York continued to struggle in one-goal games, falling to 1-4-3 in those games. The Rangers also were held to a season-low 21 shots on Friday and played without leading scorer Artemi Panarin, who sustained a lower-body injury Wednesday.

Panarin’s status is uncertain against New Jersey after he skated but did not practice on Monday. The Rangers also may be without rookie defenseman K’Andre Miller (upper-body injury), who exited practice early on Monday.

Regardless of who is in the lineup, the Rangers are hoping to get their power play going after a 0-for-6 performance Friday. The Rangers are 0-for-14 on the man advantage in the past four games and 2-for-31 on the power play in their last eight contests.

Igor Shesterkin made 29 saves Friday, only allowing a goal in the second period. He has started four of New York’s last five games and is expected to start Tuesday.