After splitting the first two games on the road, the Montreal Canadiens hope to take advantage of home ice Monday night in Game 3 of their first-round, best-of-seven playoff series against the Toronto Maple Leafs.

The Canadiens escaped Toronto even in the series despite scoring only three goals in the two games. They won the opener 2-1 but lost Game 2 on Saturday 5-1 despite scoring the first goal.

“It’s one game at a time, every game is different,” Canadiens coach Dominique Ducharme said. “I don’t think they’re going to be scoring five goals a night. (Saturday) was a different night.”

One Canadiens scoring threat, 20-year-old rookie Cole Caufield, has not been in the lineup for the first two games because Ducharme wanted to go with more experienced players.

When asked if Caufield could see action on Monday, Ducharme said: “Possible.”

The Canadiens hurt themselves by taking six straight penalties during a stretch in which the Maple Leafs did not have any. The Maple Leafs power play, which struggled late in the season, scored twice with the man advantage on Saturday.

“We were a little better in the third period, but we cut our own legs out with too many penalties,” Montreal left winger Phillip Danault said. “We had trouble getting back, but we tried the best we could in the third, but it was too late.”

The Maple Leafs had a 20-6 advantage in shots on goal in the second period, and the Canadiens had an 8-5 edge in the third.

“It was a tough second period,” said Canadiens goaltender Carey Price, who stopped 29 shots. “It was definitely important (to have a good third period). We were still in the game and had a chance to come back. We’ve done it before this season, but it didn’t work out for us.”

“I thought we had the puck the entire second period, for the most part and that really, I think, caused some fatigue on the other side,” Maple Leafs coach Sheldon Keefe said. “We were able to really get at them that way. I think that was a big factor. … It just felt like we had a lot of life and a lot of momentum, especially through that second period.” 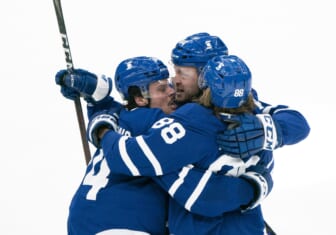 The Maple Leafs used captain John Tavares — who is out indefinitely with a concussion and knee injury suffered in Game 1 — as a rallying point.

“It means a lot,” said Auston Matthews, who had a goal and two assists on Saturday. “Not only for the guys in the locker room, but for John himself. He’s such a big part of this team and he’s our leader. Obviously, when something really scary and serious goes down like it did the other night, I think the response from the group was unbelievable. The guys that came in and stepped up, stepped up big. It was obviously a big win to even up the series.”

“We care deeply about Johnny and we want to do well for him, so we’re going to try to win as many games as we can so that we can get him back in the lineup,” said Jason Spezza, who scored Toronto’s first goal on Saturday.