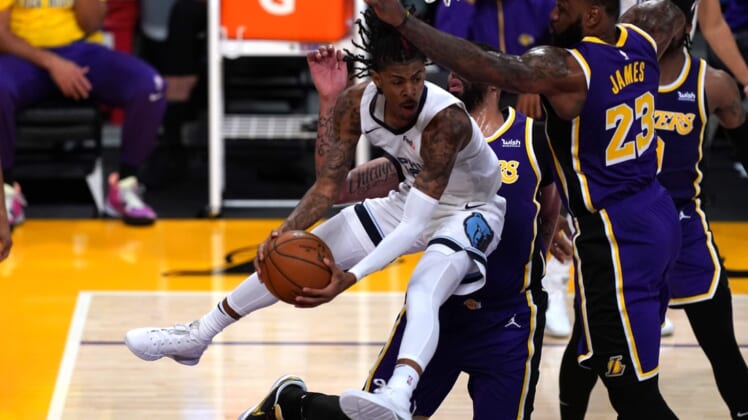 The short-handed Memphis Grizzlies look to put a stop to their recent issues when they visit the Sacramento Kings on Sunday night.

Memphis will likely have just nine available players, and that slim roster was unable to protect a 20-point, first-quarter lead in Friday’s 115-105 road loss to the Los Angeles Lakers.

The setback was the fifth in six games for the Grizzlies, who have suffered four double-digit losses during the stretch.

“We definitely miss the guys that are out right now,” guard Grayson Allen said after Friday’s loss. “We know they add a lot to our team, but I feel like the nine guys we had available did a great job of fighting. I don’t think there was any letdown or any factor of fatigue.”

Allen is one of the beneficiaries and received a season-most 35 minutes of playing time versus the Lakers. He took advantage by scoring a season-high 23 points and matching his career best of six 3-pointers on 10 attempts.

He will again see a lot of playing time against the Kings with De’Anthony Melton (shoulder) and Desmond Bane (death of family member) unavailable.

The Grizzlies roared out of the gates to a take a 22-2 lead over the Lakers but eventually the tide turned.

Los Angeles erupted for 41 third-quarter points and outscored Memphis by 23 points in the second half.

“Very proud of our effort,” Memphis coach Taylor Jenkins said. “They turned it on in the third quarter. I thought we tried, but for the most part, really proud.”

The Grizzlies will also strive for better success against Sacramento. Memphis has lost three straight meetings and seven of the past nine.

The Kings are 0-2 on a five-game homestand after falling 123-112 to the Orlando Magic on Friday.

Sacramento was without star point guard D’Aaron Fox (knee) and his availability for Sunday’s game hasn’t yet been determined.

The Kings certainly missed Fox, who averaged 31.3 points over the previous six games. He tallied 30 or more points in four of the contests. Fox also had 10 or more assists in three of the past five games and he certainly was missed when it came to his floor-leading abilities.

Rookie Tyrese Haliburton moved into the starting lineup and had 14 points and seven assists, but he also committed four of Sacramento’s 18 turnovers.

“They just physically pushed us around,” Kings coach Luke Walton said afterward. “They took it to us. The (21) points off (18) turnovers killed us.”

The Kings were also without Marvin Bagley III (calf) up front and Orlando star Nikola Vucevic was unstoppable with 42 points on 17 of 22 shooting from the field and 6 of 8 from the 3-point line.

But the Magic also made 15 3-pointers, leading Sacramento’s Harrison Barnes to feel the problems were due to other issues besides missing two starters.

“We let them get quality looks the whole game,” Barnes said. “They were getting layups and catch-and-shoot 3s. Any team you play, regardless of record or who they have playing or who we have playing, it’s going to be a tough night.”

Buddy Hield led the Kings with 19 points while backup big man Hassan Whiteside was stellar offensively and matched his season high of 16 points on 7 of 7 shooting.

Sacramento won seven of its previous nine games before the back-to-back losses to the Philadelphia 76ers and Magic. The Kings allowed an average of 121 points in the defeats.

“We expect more from ourselves,” Barnes said. “We have to be better.”