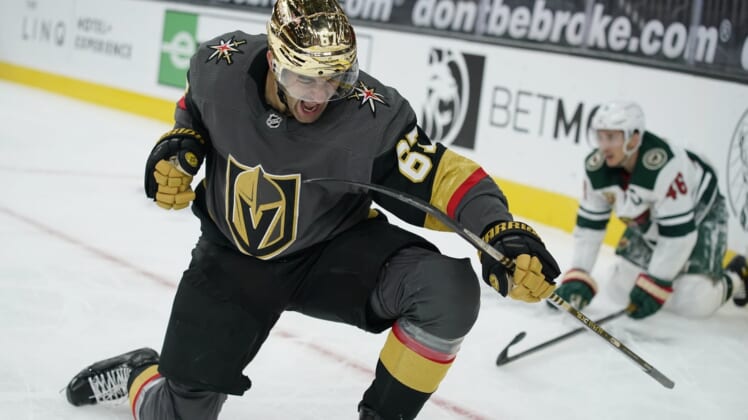 A crowd of only 2,605 in an arena that routinely sees standing-room audiences of more than 18,000 may not seem like a big deal for an NHL team, but the Vegas Golden Knights gave the small but vocal turnout a major assist in their 5-4 overtime comeback victory over the Minnesota Wild on Monday night.

The crowd was the first at T-Mobile Arena in Las Vegas in 363 days thanks to COVID-19 restrictions. A similar turnout is expected Wednesday night when the two teams conclude their West Division back-to-back showdown.

Trailing 4-2 entering the third period, the Golden Knights rallied to tie it on goals by Nicolas Hague and Alex Tuch, the latter with just 41.6 seconds remaining after goalie Marc-Andre Fleury had been pulled for an extra attacker.

Max Pacioretty then scored the winner off Mark Stone’s fifth primary assist of the game two minutes into overtime to give Vegas its first-ever regular-season third-period comeback victory from a multiple-goal deficit.

The Golden Knights didn’t register a shot on goal in the first 11:35 of the final period but, spurred on by the small crowd, had the final 12 shots of the game capped by Pacioretty’s second goal of the night at the end of a 2-on-1 rush with Stone.

“It was electric,” said Tuch, a former first-round pick of the Wild. “Obviously, it was limited capacity, but it felt like a full building. The crowd was really into it, felt like they were right on top of us. They gave us the momentum to come back and win the game.”

“That was the story of the game,” added Vegas coach Peter DeBoer. “Just having them in the building, the energy. … They were a big part of what we did in the third period. I think the guys wanted to make sure they left with a win.”

The victory enabled Vegas to stay in first place in the West by one point over St. Louis and two points ahead of Minnesota. The Wild had a six-game win streak, tied for the longest in the NHL this season, snapped.

Stone became the first player to record five primary assists in a game since Artemi Panarin did it on Dec. 8, 2017, while with the Columbus Blue Jackets, according to NHL public relations. Stone now has 18 assists in 18 games, and 22 points. No other Vegas player has notched more than 16 points this season.

“That’s why he’s the captain,” Tuch said. “He comes in every day and shows up with that work ethic and that enthusiasm.”

“They’re obviously a good team,” Evason said. “They clearly pushed hard. We got on our heels a little bit. Momentum shifted a little bit. It happens in a game. We’ve been on the other side of it but it went the other way tonight. … I thought we played a really good game.”

“I think we just let off the gas a little bit,” said forward Marcus Foligno, who had two goals and an assist during a four-goal second period for the Wild.

“Give credit to their top line, they made good plays, they didn’t chip it in, they did a good job of carrying the puck in and sustaining pressure. But we’re still a good enough team to hang onto leads like that and get the win.”

Wild forward Ryan Hartman, who left Monday’s game with a lower-body injury, will miss Wednesday’s game, according to Evason.