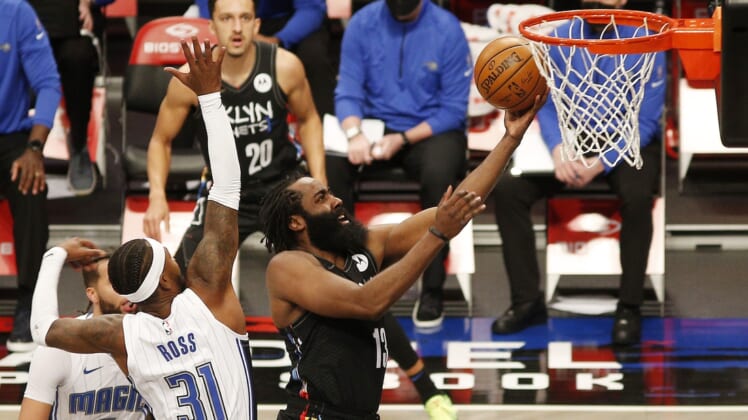 When James Harden grabbed a rebound in the waning seconds on Wednesday night, he ended a Brooklyn Nets win with another triple-double.

With his season total up to 11th triple-doubles, Harden gets his first chance at tying Jason Kidd’s franchise season-season record Friday night when surging Brooklyn visits the struggling Orlando Magic.

Harden finished Brooklyn’s 124-115 victory over the Indiana Pacers with 40 points, 15 assists and 10 rebounds. He is on the verge of matching Kidd’s mark even though he has played just 27 games with the Nets since being acquired from the Houston Rockets in mid-January.

The Nets are 10-1 when Harden produces a triple-double. He has scored at least 30 points in three of those contests and has handed out 15 assists three times in those games.

“James is so elite,” Nets coach Steve Nash said. “He’s able to make the big plays that very few people can make down the stretch, and when he plays that many minutes, he stuffs the stat sheet.”

Kidd set the record in 2006-07 when he played 80 games for the then-New Jersey Nets. He matched the mark a season later in 51 games before being traded to the Dallas Mavericks.

Brooklyn is 14-1 in its past 15 games and has won a franchise-record eight straight road games and six straight overall. The last three games have seen the Nets recover from difficult moments at various points while Harden has recorded a triple-double.

“It’s not even about the triple-double, it’s about our effort,” Harden said.

Harden’s latest triple-double was achieved while Kyrie Irving sat due to right groin soreness. Irving is listed as probable for Friday.

“Some of what they do is different,” Orlando coach Steve Clifford said. “It’s just the greatness of two players you can’t possibly guard one-on-one, so the details going into that are more difficult.”

The last meeting with the Nets was the second loss in Orlando’s nine-game losing streak. It is the Magic’s longest skid since another nine-game streak from Dec. 8-26, 2017. Orlando hopes to avoid its first 10-game skid since Jan. 16-Feb. 4, 2015.

Orlando is coming off a 94-93 loss at New York on Thursday when the Knicks’ Reggie Bullock stole the ball from Evan Fournier with 5.9 seconds left. Fournier’s turnover came after Orlando overcame a 16-point deficit and took a pair of five-point leads in the fourth.

Fournier scored 23 points in his first game back from a four-game absence caused by a groin injury. Aaron Gordon added 17 points in his return from a two-game absence prompted by a sore ankle, and he said he plans to play again Friday.