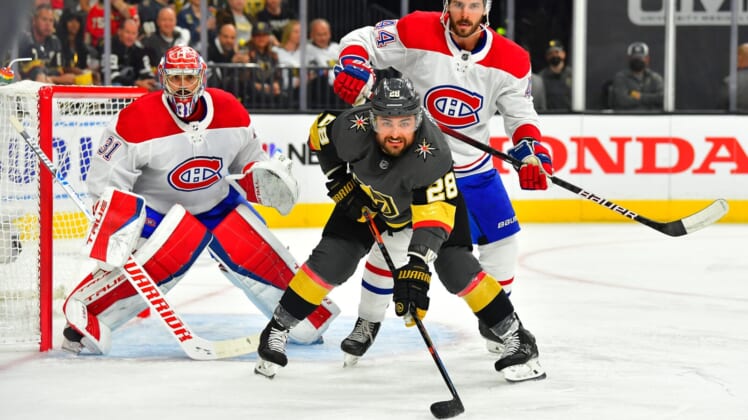 After a dominant Game 1 in which the Vegas Golden Knights imprinted their will on the Montreal Canadiens, they now have to forget about that game and focus on Game 2. Vegas cannot afford to rest on their laurels and instead must approach tonight’s game with the same intensity that they did on Monday night. They know that they will travel back to Montreal with a huge 2-0 series lead if they can execute their game plan to the same degree.

Game 1 went about as smoothly as one can ask for. The Golden Knights relied on goalie Marc-Andre Fleury to shut down an early push from the Canadiens, and after that, they put the pressure on en route to a 4-1 victory. They made it look easy, but this is the NHL playoffs, and things are never that easy.

The Canadiens will surely come out tonight with a burst of energy as they do not want to fall behind 2-0 to a Golden Knights squad that has been on fire. Carey Price had a strong game on Monday as he made multiple highlight-reel saves, but no one would be surprised if he topped that performance and stood on his head tonight. The Golden Knights will need to pepper him with shots and make him uncomfortable if they want to experience the same offensive success.

The Golden Knights have an opportunity to take a commanding lead in this series and travel back to Montreal only two wins away from a spot in the Stanley Cup Finals. The question is, will they be able to pull it off?

The Golden Knights scored four goals in Game 1, a number that will get them the win more often than not in the playoffs. However, despite the impressive number of goals, what was even more interesting was where they came from. All of the big names on the Golden Knights had quiet games. Instead, the goals came from defensemen and depth players.

Nick Holden has been a player with an outsized offensive impact throughout these playoffs compared to what is expected of him. He has managed to find the back of the net for a few big goals, including one last game that put the game out of reach.

If the Golden Knights top scorers start to find their rhythm, their attack will reach new heights. Unfortunately, the Canadiens don’t have nearly enough offensive firepower to match the Golden Knights when things go on all cylinders. But, a few big games from Mark Stone and Max Pacioretty, and this series could be over sooner than later.

The Golden Knights have been very strong at home during this postseason so far. Much of that can be attributed to both the comforts afforded by playing in your home city as well as to the rabid crowd at T-Mobile Arena. The fans have made their presence felt and been a big energy boost.

The Golden Knights have a chance tonight to win another game at home, giving them a crucial 2-0 lead that they would carry back to Montreal. As they are the higher seed, the Golden Knights just need to protect home-ice to win this series. Any wins on the road can be considered bonuses.