PREVIEW: Golden Knights face-off vs top-seeded Avalanche in Round 2 Sunday 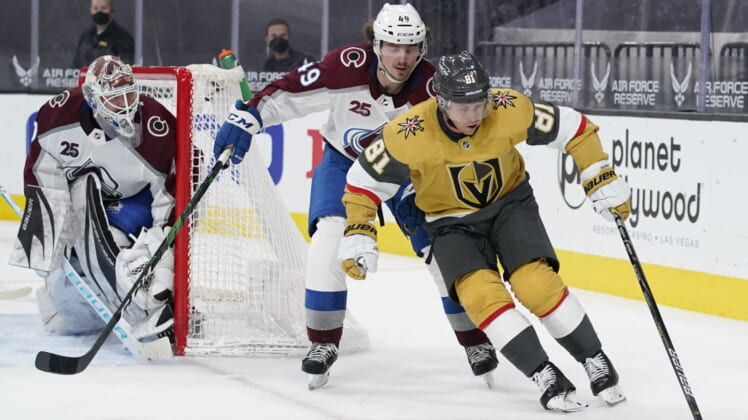 After a huge Game 7 victory vanquishing the Minnesota Wild in the first round of the Stanley Cup Playoffs on Friday night, the Vegas Golden Knights didn’t get much time to rest before traveling to Colorado where they will take on the Avalanche tonight.

This is only the fourth time in league history that two teams tied for first overall in points during the regular season ended up meeting in the playoffs.

This is the series that everyone has been waiting for as these two teams have been on a collision course as the Top 2 seeds in pursuit of Lord Stanley’s cup. The Avalanche stole the President’s Trophy from the Golden Knights in their last game of the season, but the two teams both finished with a league-leading 82 points.

This is only the fourth time in league history that two teams tied for first overall in points during the regular season ended up meeting in the playoffs. The winner of this series will advance to the league semi-finals where the bracket will be rearranged based on regular-season performance.

This series will look very different compared to the last round for the Golden Knights as they face a very different opponent. The Wild played with a strong defensive structure and looked to capitalize on the few chances a game they could muster, their offense going hot or cold depending on how opportunistic they were that night. The Avalanche are widely regarded to have one of the most electric collections of talent in the league and can score goals quicker than any other team in the league.

Against the Wild, the Golden Knights had a few games where they got off to slow starts before turning things around. That may have worked against a more defensive team like the Wild, but if they give up too many early chances to the Avalanche they will face a huge uphill battle for the rest of the game. If they continue the trend of only turning it on later in the game, they will go home this round.

So what do the Golden Knights need to do in order to get started off on the winning foot?

Golden Knights need a win on the road

The Golden Knights managed to win two-of-three games on the road in the first round and they will need to have some of that same success here in the second round. The Avalanche are one of the best teams at defending home ice in the entire NHL with a record of 18-0-1 over their last 19 at home. They also outscored opponents 110-54 while they were home in Colorado. Vegas has a tough battle ahead of them but it’s not insurmountable for the talented and deep Vegas roster.

The Avalanche will have the home-ice advantage in this series because they snuck out the President’s Trophy at the very last second. This means that even if the Golden Knights go perfect at home, they will need to steal at least one game on the road.

“We don’t mind playing on the road”, said head coach Peter DeBoer Sunday morning. “It’s a nonissue for us as a group.”

If the Golden Knights could fly back to Vegas for Game 3 with the series tied 1-1, that would be considered a great outcome. It’s always easier playing in front of your own fans and T-Mobile Arena has clearly given the Golden Knights a big energy boost.

While the Golden Knights generally played solid defensive hockey in the first round, there were a few instances of defensemen getting caught up ice, or forwards getting caught sleeping in the defensive zone. It cannot be understated how dangerous the Avalanche are offensively and those mistakes will end up as goals on the scoreboard.

“They’re one of the best offensive teams in the league and we just got to play smart and not get into that game with them,” said Golden Knights forward Chandler Stephenson. “(We have to)take away their time, speed, and space out there.”

That’s easier said than done against an Avalanche team with a plethora of offensive talent at all positions. Of most concern is forward Nathan Mackinnon who made a mockery of the St. Louis Blues in the first round with six goals and three assists in just four games. Defenseman Cale Makar is also a generational offensive talent that helps the Avalanche machine run smoothly.

Get scoring from the top line

In Game 7, against the Wild, it was the Golden Knights depth that shined as they got most of their goals from players at the bottom of the lineup. Against the Avalanche, they’re going to need the big guys to show up and put pucks in the back of the net if they want a chance at matching the Avalanche’s firepower.

The return of Max Pacioretty should help in that area as he was very successful against the Avalanche in the regular season, scoring six goals in seven games. Alongside Mark Stone and Stephenson, the first line will be expected to be dangerous offensively and create for the Golden Knights as they have all year.

The puck drops tonight at 5 PM PDT in Colorado for Game 1 of this series.