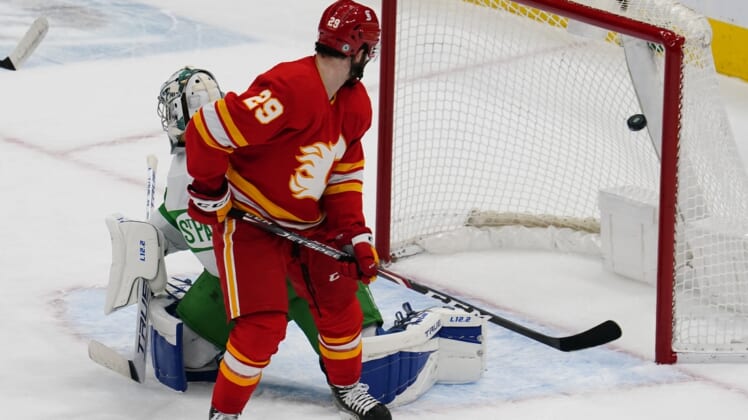 The visiting Calgary Flames will be out to complete a two-game sweep of the struggling Toronto Maple Leafs on Saturday night.

The Flames, who have won four of their five games under new coach Darryl Sutter, 4-3 at Toronto on Friday night despite giving up a two-goal lead.

The Maple Leafs have won three of the five games between the teams this season. Four of the contests were decided by one goal. Overall, though, Toronto has dropped six of its past seven games.

Calgary defenseman Mark Giordano scored on a power play at 12:33 of the second period Friday to snap a 3-3 tie. He also blocked five shots and was prominent when Toronto had two third-period power plays. He logged nearly 23 minutes of ice time.

“I think he made those big plays at big times,” Sutter said. “The goal obviously is a big play, but he also played heavy minutes and did a great job.”

Toronto, coming back from four days off on the schedule, had Wayne Simmonds in the lineup after he missed 18 games due to a wrist injury. Simmonds recorded an assist.

The Maple Leafs had 27 shots on goal, and Calgary goalie Jacob Markstrom made a superb stop on Auston Matthews during a Toronto power play in the third period.

“I thought Calgary did a good job of clogging the middle in their zone,” Simmonds said. “I thought we had a lot of offensive-zone time, a lot of shots directed at the net. I think (Saturday we’ve got to maybe do a better — not maybe — we’ve definitely got to do a better job getting second and third opportunities and breaking through their box in front of their net there.”

The Flames were coming off a 7-3 home loss to the Edmonton Oilers on Wednesday.

“I thought we defended a little better than we did against Edmonton,” said Derek Ryan, who scored Calgary’s second goal on Friday. “But I think we still have a lot of improvement to make in that regard.”

The Flames had only 18 shots against Maple Leafs goaltender Frederik Andersen, who is not scheduled to play Saturday. Jack Campbell, who has returned from a leg injury, will get the start.

“Three of the goals, obviously, were right through traffic,” Andersen said. “And (it is) something I probably ought to look at and see what I could have done differently to try to fight through it and find those pucks quicker.”

The Maple Leafs have won all three games that Campbell has played this season.

“I expect him to battle the way that he has,” Maple Leafs coach Sheldon Keefe said. “He’s played great for us, so he’s a guy that goes in with a ton of confidence and, obviously, no matter who’s in goal for us, we’ve got to just focus on our game in front of the goaltender and protect him and do a good job with good structure. That’s obviously an area we’ve got to continue to get better no matter who’s in goal.”

Alex Galchenyuk, acquired from the Carolina Hurricanes in February, played his first game for the Maple Leafs on Friday and finished with a minus-2 rating in 11 minutes. He had two goals and six assists in six appearances with the AHL’s Toronto Marlies.