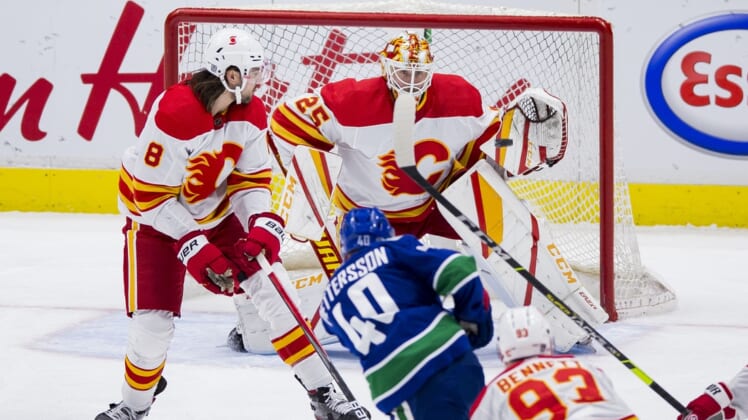 On the surface, a 3-1 defeat isn’t crushing. It’s the way the Calgary Flames lost on Saturday to the Vancouver Canucks that should have them extra motivated when they meet again Monday night in Vancouver.

While the Canucks can be proud of the way in which they snapped a six-game losing streak, the Flames have much to improve upon in their third of four consecutive meetings. Calgary surrendered a season-high 46 shots on goal — 20 in the first period alone — while managing a season-low 19 shots on the Vancouver net.

Related: If you’re a fan of the Flames, check out #NHLFlames rumors, rankings, and news here.

Despite how one-sided the action was in Saturday’s game, it was a 1-1 affair with less than six minutes remaining in regulation, in big part because of scintillating goaltending from Jacob Markstrom, but the Flames weren’t fooling themselves.

“We were slow everywhere to be honest with you,” coach Geoff Ward said. “We weren’t skating — it was evident — and they were able to get a forecheck. The game’s fair. We got what we deserved. We were out-worked, out-skated and out-competed. Usually when that happens, you don’t get the result you want.”

Despite a fantastic 43-save performance that nearly stole a win, Markstrom blamed himself instead of his teammates — who indeed deserved to be chastised.

“They threw a lot of pucks at the net, and there’s a lot of volume, but at the end of the day it’s my job to stop the puck,” Markstrom said. “It’s frustrating for me to feel like I’m playing a really good game, and then five minutes left not come up with one more save to at least take it to overtime and get a point and give the team a chance.”

Flames center Mikael Backlund left the game in the first period due to a lower-body injury after blocking a shot, but on Sunday Ward said he’s day-to-day. They are already without center Derek Ryan due to injury.

The Canucks have outshot the Flames by a wide margin in both meetings during this mini-series — Calgary won a pair of mid-January clashes in their first encounters of the season — and now will work to overcome their horrible 7-11-0 start to the campaign.

“When you lose that many in a row, you know that the heat’s on,” coach Travis Green said. “It’s a proud group, they expect to win every night. They know they hadn’t played their best early in the year. They know they’d played well the last two games before this. It’s a nice win, for sure.”

Prior to the clash, Canucks owner Francesco Aquilini via social media defended general manager Jim Benning as well as Green, and said he has “no plans to make changes” despite calls in the city for them.

Then, instead of arriving to the rink wearing suits as tradition, the Canucks players instituted a “casual” wardrobe rule, rather than expecting each other to wear “work clothes” to remind them what was necessary to pull out of their slump.

“I think that’s maybe the most promising thing to come out of the win,” defenseman Quinn Hughes said. “It was pretty cool to just put on a jacket and come to the rink. We’re just trying to have fun as a group again and I think it’s been helping. We were making plays. We’ve been making plays the last couple of games. You can see it. We’re playing in the (offensive) zone a lot more, and defensively, we’re paying more attention to that.”

Only time will tell whether the victory is just a small respite from a long, difficult season or actually something Vancouver will build upon, but the Canucks do have hope they can climb the standings.

“Obviously, we needed a win bad, and we felt like the last two games that we could have won,” Hughes said. “We played really good hockey, but to get rewarded is nice. We just wanted the result and we kept going, we didn’t fall asleep and … played a good game.”