The Boston Bruins have had too much for Washington at both ends of the ice in the first four games of their first-round playoff series. Now, the Bruins have a chance to close out the series when they visit the Capitals for Game 5 Sunday night.

Boston holds a 3-1 edge in the best-of-seven series after its 4-1 victory in Game 4 Friday night. After the Capitals, the No. 2 seed in the East Division, won the first game on home ice, the Bruins took Game 2 in Washington and then won both contests in Boston to move the Caps to the brink of elimination.

The victory Friday saw the Bruins again use their speed to create numerous scoring chances and outshoot Washington 37-20. David Pastrnak led Boston with a goal and an assist while the Bruins also got goals from Charlie Coyle, Matt Grzelcyk and Brad Marchand.

Defenseman Charlie McAvoy pitched in with three assists. Boston made the Capitals look slow and flat as the Bruins have controlled play in the past two games.

“We wanted it and it showed,” Boston coach Bruce Cassidy said. “It showed out there. We’ve talked about getting better all the time as we go along, and that includes this series, that includes period to period. I think we’ve progressively built our game here at home.”

The Bruins have matched the Caps in the physicality department, but the older Washington team clearly has found trouble dealing with Boston’s quickness.

However, Boston will be without defenseman Kevan Miller after a hit from Dmitry Orlov injured him in the second period of Game 4. Miller went to the hospital, and he is recuperating at home. He will not play in Game 5.

Washington needs to do something to get its offense going. Alex Ovechkin scored his second goal of the series, the Caps’ lone goal in the 4-1 loss, but Washington often has been unable to keep pace with the Bruins.

To keep their season alive, the Caps, simply, need to do better in Game 5.

It remains to be seen who will be in net for Washington in Game 5. Ilya Samsonov has played the past two games and been effective, except for one mistake in double overtime that helped the Bruins score the game-winner in Game 3. 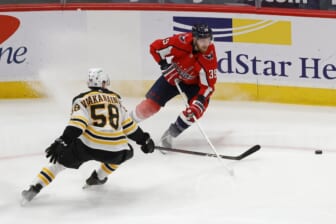 Vitek Vanecek started Game 1 and left with an injury, and Craig Anderson, who just turned 40, went the distance and helped the Capitals pull out an overtime win. Anderson then started again in Game 2, but Washington lost in overtime.

Samsonov took over in Game 3 and was playing for the first time since May 1 due to being on the COVID-19 protocol list. The Caps became only the second NHL team ever to start three different goalies in the first three games of the playoffs.

Will they go back to Samsonov for a third straight game or use someone else? The Caps also must improve on penalty killing as they gave up three power-play goals to Boston in the Game 4 loss.