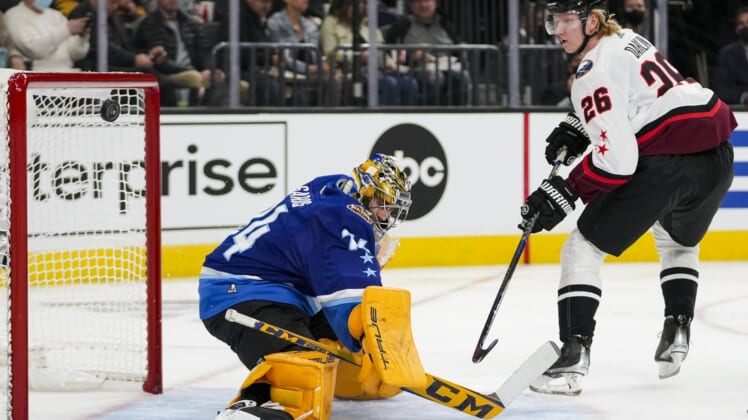 With the postseason chase in full swing, Nashville can’t afford to look past the in-form Buffalo Sabres when the Predators visit on Friday.

The Predators are in possession of the Western Conference’s top wild-card position but are close to a top-three finish (and a guaranteed playoff berth) in the Central Division. Nashville is just one point behind the third-place St. Louis Blues.

With several games against contenders lined up for the final month of the regular season, Friday’s matchup in Buffalo represents one of the Predators’ few remaining games against a team that isn’t also in the playoff hunt.

However, the Sabres are somewhat quietly playing perhaps their best hockey of the season, with a 6-1-3 record in their last 10 games and a seven-game (4-0-3) points streak. This represents the Sabres’ longest points streak since they went 7-0-1 in an eight-game stretch spanning the 2018-19 and 2019-20 seasons.

It sets the stage for a competitive game Friday, as Nashville has also been playing well. The Predators are 9-4-0 in their last 13 games and are on a two-game winning streak following Tuesday’s 4-1 home win over the Ottawa Senators.

The difficult nature of that victory might ensure that the Predators won’t take the Sabres lightly, as the struggling Senators outshot Nashville by a 37-32 margin. Goaltender Juuse Saros needed to make 36 saves, and Nashville’s penalty-kill unit went 5-for-6 on Ottawa power-play attempts.

“Obviously we relied on (Saros) too much. We took too many penalties,” said Predators forward Michael McCarron, who scored two goals. “But, tight teams find a way to win those kinds of games, and I think we’ve got such a tight group in there. We were able to stick together and find a way.”

Closely fought games have become a habit for the Sabres, as six of Buffalo’s last seven games have gone beyond regulation time. On Wednesday, the Sabres took things to a shootout before falling to the Winnipeg Jets by a 3-2 score.

Zemgus Girgensons scored two goals for Buffalo, including the only score of a first period that saw the Sabres enjoy a 13-5 shots edge over the Jets.

“It was a hard-fought game, but yeah, we could’ve had some separation,” Sabres coach Don Granato said. “We played very well early, and not that we played poorly late, but we just played better early and couldn’t get that separation on the scoreboard.”

Craig Anderson stopped 25 of 27 shots against Winnipeg. This could merit another start for the veteran on Friday, though the Sabres have recently been splitting time between Anderson and Dustin Tokarski.

Saros has started 56 of Nashville’s 67 games, and the workhorse goalie will likely be back between the pipes again against the Sabres.

The Sabres won the first meeting between the two teams this season, defeating the Predators 4-1 in Nashville on Jan. 13.