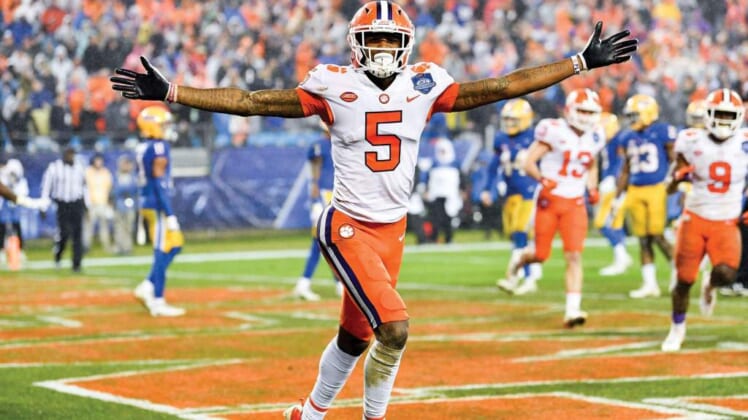 As the Raiders continue to make progress in their rebuilding process, we take a look at some players that could be on their radar as we head into college football bowl season this month.

As the Raiders enter Week 14 of the 2019 NFL season, they are still very much a work in progress. Sitting at 6-6, there’s no doubt the future Las Vegas home team is headed in the right direction but still have significant needs and could have more after the season wraps up.

Although we have no way of knowing what Mike Mayock and Jon Gruden may have on tap for April when the NFL Draft rolls into Las Vegas, here are a few players we believe Raiders fans should watch as we enter that most wonderful time of the year – college football bowl and championship season.

This watch list is based on current and possible future Raiders positions of need.

Yes, the Raiders need to prioritize linebackers in the 2020 draft. There are several good ones who could go between the first and third rounds. Here’s two we believe would be a good fit in Las Vegas:

Murray is a big, physical backer who has Raider written all over him. He’s extremely aggressive (sometimes too aggressive) and is an all-around stellar athlete. He can run sideline-to-sideline in run defense, can rush the passer as a dangerous player in blitz packages, and plays well in the zone too. He’s a sure-fire three-down starter who will be sought after early in the draft.

Simmons is another candidate for three-down started status in the NFL. He’s a gifted player who can defend the run and pass while covering the middle of the field too. His size also allows him to readily handle big backs in the running game and his tackling skills are second-to-none. In an era where tacking fundamentals leave a lot to be desired, Simmons is a textbook example of how someone at his position should tackle. The converted safety can play outside or SAM. We’re not sure he’ll be available for the Raiders to select but a player to keep your eyes on.

There’s no denying the defection of Antonio Brown before the start of the season hurt the Raiders offense. They put their stock in a mentally unstable asset and it bit them hard. The Raiders must get a true No. 1 wideout for their offense to build on their plan.

Yes, this is an extremely deep wide receiving class which is a good thing for a team with two first-round draft picks like the Raiders in 2020. Some of the other names Raiders fans covet should be gone by their first pick at roughly 16th overall so we’re presenting more realistic targets. Higgins possesses the size and playmaking ability to fill the No. 1 spot in Gruden’s offense. His length and body control are top-notch and make him a viable choice here.

There might bigger names and wide receivers rated above him, but Ruggs III is by far my favorite. His neck-breaking speed and ability to make plays are jaw-dropping – allowing with his entire Alabama receiving corps teammates. Another kid who may go too early for the Raiders to nab him but if he’s there, they shouldn’t think twice.

The Raiders have made a lightyear jump on the defensive front – even if it has been inconsistent at times. They’ve rushed the passer better at times and 2019 fourth-round pick Maxx Crosby has far surpassed any expectations most of us had. Still, they can get better on the outside to improve their pass rush on Day 2.

The long and lean Okwara has the perfect frame to start at the EDGE in the NFL. He also has perhaps some the best hands of an EDGE in the draft and his bend is Top 5 as well. His success at the college level is well documented but he appears to have all the intangibles – to go with the fundamentals – to be a long-term starter and impact player at the next level.

Over the course of his Pac 12 career, Anae has proven early observers wrong who said he was not versatile. He continues to show that he can be versatile and even stand up and play at the SAM position. But his high motor and disruptive ability (much like Crosby) shows he’s a hard-working player that can develop into a solid EDGE at the pro level.

Whether you’re pro-Carr or not, every team looks at every position each year so we will as well. The 2020 quarterback draft class has some gems but, unless Gruden and Mayock feel they can’t get there with Carr and trade up, it will be hard to get a Top 3 signal-caller in 2020 – if that’s what they want to do. But who could be available later in the first? Here are a couple of names to consider.

I know, I know: he’ll be gone you say. Yet with his injury, and the draft order moving a bit if Tua was there – or the Raiders could trade up a few spots to grab him, I could see a fit there. It’s a long shot but Tua’s a coveted player who will be a team’s long-term bet on a franchise quarterback in this draft. Tua is expected to recover fully from his dislocated hip, but if he’s not assured to be a Top 15 pick, could he return to Alabama for his senior season?

I’m adding Fromm only because I think he will be there when/if the Raiders could pick a quarterback. But Fromm, despite the early buzz and being a solid college quarterback, doesn’t have an elite arm and I can’t imagine the Raiders moving on from Carr for a guy like Fromm. He’s got the brain, the poise and he makes good decisions but when drafting a franchise quarterback, I don’t think he fits the bill. And that’s the Raiders quandary with the position this year. I don’t see the Raiders moving on from Carr but Fromm will be somewhere on a lot of team’s draft boards this season.