May 27, 2021; Portland, Oregon, USA; A general view inside the Moda Center before game three in the first round of the 2021 NBA Playoffs. Mandatory Credit: Soobum Im-USA TODAY Sports

Her name is known in the Portland area. Curry played college basketball at Cal State Northridge, then transferred to Oregon, where she helped to lead the Ducks to a WNIT championship in 2002.

That year, the Charlotte Sting made her the No. 41 overall pick in the WNBA draft. In the league, she played for the Phoenix Mercury and Los Angeles Sparks, and she also spent several seasons overseas.

In 2015, she became an assistant coach for the women’s team at Maine, then in 2018 joined the coaching staff of the men’s program. At the time of her hiring, Curry was the only woman working as a full-time assistant coach in NCAA Division I men’s basketball.

She also participated in the NBA Assistant Coaches’ Program, where she got experience working at the NBA Draft Combine and the NBA G League Showcase. 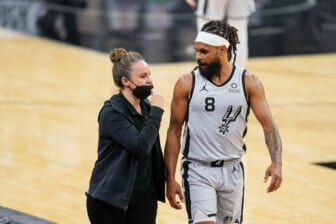 Also Read:
Becky Hammon has every right to sound off over Portland Trail Blazers situation