Portland Trail Blazers rumors are flying early in their offseason, which came earlier than the franchise had hoped after they were eliminated by the Denver Nuggets in the first round of the NBA playoffs.

The Blazers hired Chauncey Billups to be their new head coach and are entering a massive summer where they must figure out how to assemble a legitimate contender around superstar point guard Damian Lillard.

Did general manager Neil Olshey get the right new voice in the locker room to succeed where Terry Stotts fell short? Does Olshey still have a few more roster moves on the radar or are the Blazers hoping the coaching change makes the biggest difference?

Whatever happens, all eyes will be on Portland. Let’s take a look at some trade scenarios, free-agent targets, and the latest buzz surrounding the Blazers. 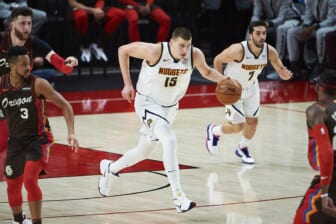 With trade rumors swirling all offseason in Portland, star guard CJ McCollum was recently asked by Jalen Rose about his approach to handling the uncertainty.

What else can McCollum say? Entering his ninth season in the NBA and first as the president of the NBAPA, McCollum is well aware of how quickly a roster can change. He also knows any potential trade is completely out of his control. For his part, it sounds like McCollum wants to try to make things work with Damian Lillard and new coach Chauncey Billups.

A highly drafted forward who never quite reached his NBA potential, Michael Beasley is reportedly on Portland’s radar, according to Michael Scotto of HoopsHype.

Beasley is a uniquely skilled forward who can handle the ball and slash to the paint at 6-foot-9. He can score from any area on the floor. The problem is, he hasn’t played in the NBA in a regular-season game since the 2018-19 campaign. If he’s anywhere near his ceiling as a player, though, Portland should definitely try to add him.

In an interview with The Athletic, Lillard addressed his uncertain future and didn’t really reveal much about what his plans are:

“You get to a position where it’s like, ‘Do I defend myself or do I just say nothing.’ For me, when I’m just hearing stuff that’s not the facts, I’m going to say I didn’t say that,” Lillard said. “Some things I’ve just got to let it be said. I know what the truth is. I know where I stand. It’s not my duty to make the public know … it’s not my job to make them aware of what that is.”

Indeed, it’s not on Lillard to keep the public updated on what he wants to do, but it’s the subject of endless speculation. Until he truly, definitively says he’s staying in Portland, the trade rumors will persist.

The Blazers did acquire some forward depth in Larry Nance Jr. when they were part of a sign-and-trade deal with the Cleveland Cavaliers. That’s not the biggest splash move in the world, yet it addresses the need for defense, and size on the wing for Portland.

Bleacher Report’s Jake Fischer provided the latest update on Lillard’s future in Portland, indicating that a potential trade involving the superstar could be reevaluated once the NBA’s deadline for deals is closer.

Lillard has been heavily linked to the Philadelphia 76ers, who have their own star they’re much more interested in trading at this point in Ben Simmons. A one-for-one swap isn’t even for the Blazers’ side of things, but if Philly ups the compensation, Lillard could be headed there at some point.

For now, Blazers fans can just hope new coach Chauncey Billups gets Lillard and the rest of the squad to buy in to his program as they try to push higher in the Western Conference and get Dame to stay long-term.

ESPN.com insider Zach Lowe reported the latest buzz on Lillard’s future with the Blazers, and it seems like the superstar is remaining loyal to the organization that drafted him.

Lillard may be best served to play elsewhere if he wants to contend more immediately for a championship. However, after seeing Giannis Antetokounmpo stick with the Milwaukee Bucks and deliver a title, perhaps Dame has a similar mentality, despite Portland transitioning to a new head coach in Chauncey Billups.

Blazers GM Neil Olshey apparently isn’t willing to part with McCollum just to appease Lillard by making a big move, according to The Athletic‘s Jason Quick.

“The general tone I’ve heard is the Blazers won’t move him just to have a different look next season. The trade has to make them better, and so far, other teams haven’t met that bar,” Quick said regarding a potential McCollum trade.

McCollum and Lillard are one of the best offensive backcourts in the NBA. Unfortunately, Portland is running out of solutions in free agency to improve its defense, which may make a blockbuster deal centered around one of its star guards inevitable.

Here’s an interesting update from TrueHoop’s Henry Abbott, who reported that Lillard could give up paychecks in order to get himself onto a legitimate championship contender:

For his part, Lillard fired back at Abbott, insisting the report was completely false:

Right now, Lillard is focusing on Team USA basketball at the Tokyo Olympics, and there’s still time for Portland to build out its roster a little more. That said, Lillard is such a big piece to any transaction that it’s difficult for the Blazers to plan without fully knowing his fate.

Jason Quick of The Athletic reported that teams near the top of the NBA Draft are offering trade packages for McCollum, but that the Blazers are in win-now mode and want to hang onto him for the time being.

Because Damian Lillard’s future is so uncertain, it makes sense to stand pat on McCollum. However, there’s little doubt at least one member of Portland’s exciting backcourt will be traded at some point this summer.

Lillard and McCollum can produce offensive fireworks with the best in the NBA. Their collective defense is holding the Blazers back, though. If Dame stays in a Blazers uniform, it’ll mean McCollum is gone. Don’t expect much movement from Portland when it comes to the draft.

The Golden State Warriors have reportedly “internally discussed” what it might take to swing a blockbuster trade for Damian Lillard, per The Athletic‘s Derek Bodner.

In this hypothetical scenario, a package of James Wiseman, the seventh and 14th picks in the 2021 NBA Draft and Andrew Wiggins are floated as a starting point for negotiations. It’d probably be as good as Portland could do if Lillard does, in fact, want out.

Improving on defense might mean trading either Lillard or CJ McCollum this summer, even if the Blazers brass faces backlash for pulling off either of those deals. Both guards make for an electric offensive backcourt, but the combo has come up short in the postseason.

It’d certainly make sense for both teams involved. The Blazers have glaringly obvious defensive issues, and Simmons might be the best, most versatile single defender in basketball. He’d also still give Portland a facilitator on offense, and someone who could mix up the team’s rotation and make the offense move more smoothly.

Meanwhile, even after achieving the East’s No. 1 seed, Philadelphia likely bolster its NBA Finals prospects by replacing Simmons with Lillard. Pairing the likes of Dame with Joel Embiid would be a fascinating combination, and the Sixers have plenty of 3-point shooters to make the fit even better.

Since Embiid is so dominant on defense, he’d mask any deficiencies Lillard has on that end since he expends so much as a creative scoring force.

Yahoo Sports’ Chris Haynes reported that a variety of factors may trigger Lillard to want out of Portland, which would obviously be a devastating blow to the franchise.

Lillard was reportedly frozen out of the hiring process that went into landing new head coach Chauncey Billups. None of the candidates Lillard personally advocated for were part of Portland’s interview process.

Combine that with the inability to surround Lillard with adequate talent, and it’s understandable why he might want to try his luck elsewhere. The Blazers could obviously get a superstar in a blockbuster trade. Keep an eye on this story as one of the biggest in the NBA offseason. 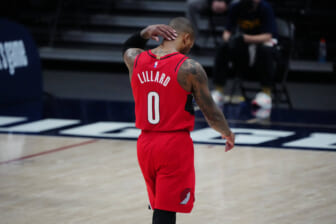 Also Read:
3 reasons why Damian Lillard would be justified to request a trade from the Portland Trail Blazers

Moving off CJ McCollum should be a strong consideration

Again, you could argue that the right coach will get this core of Portland players moving in the right direction, especially if a substantial improvement can be made on the defensive end.

But maybe it’s as simple as Lillard and CJ McCollum both being so dynamic on offense that they don’t have enough to give defensively. Thus, Lillard needs more of a two-way backcourt mate to have the Blazers consistently competing for championships.

There are a number of teams who’d be interested in acquiring McCollum because of his excellent offensive skill set. It’s possible that he’d be better off somewhere else, where his defensive shortcomings could be masked by a talented supporting cast.

McCollum is easily the biggest trade chip Portland has, so any huge roster shakeup would start by sending him somewhere else. Blazers fans would hate to see him go, as would Lillard, but it may be in the best interest of all parties involved. 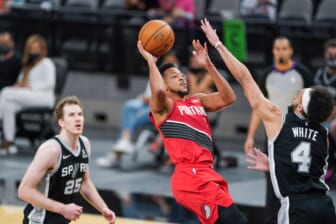 The above article outlines some excellent trade scenarios, but here’s a tweaked version of a mock trade that sends McCollum to the Los Angeles Clippers.

Sacrificing that many draft picks to make a Paul George trade work would be well worth the cost for the Blazers, especially if Rajon Rondo came over from the Clippers as part of this massive deal.

George has been one of the best two-way players in the NBA for several years. However, he’s a questionable basketball fit in LA alongside Kawhi Leonard. They essentially play the same position, and they’re too decorated of players to be in that situation. If they don’t win a championship this postseason, it wouldn’t be a huge shock if George gets traded.

It’s also true that the Clippers need a better pure guard who can also distribute. That’s where McCollum would step in and fit nicely with that squad’s current core. Robert Covington would give Los Angeles more depth on the wing and someone who can rebound extremely well for his size.

As for the Blazers’ side of this, PG13 and Rondo would give them that defensive boost they need. George is a worthy No. 2 alongside Lillard, and Rondo could provide a spark off the bench running the offense for Portland’s No. 2 unit.