Philadelphia 76ers star Ben Simmons did his reputation no favors with one of the worst playoff performances in recent memory. While he played a significant role in Philadelphia’s playoff exit and it is fueling NBA trade rumors, his value might not be as bad as perceived.

The 76ers are very aware of the 6-foot-11 guard’s limitations and his issues became an even bigger problem in the NBA Playoffs. While injuries influenced the outcome of the seven-game series against the Atlanta Hawks, Simmons’ unwillingness to shoot and inability to make free throws let the Hawks advance.

It resulted in the 76ers evaluating everything this offseason. The team’s priority is a trade for a superstar, landing Damian Lillard in a blockbuster deal. But even if that doesn’t happen, Simmons could be moved within the next few months. Despite his ugly stretch on the national stage, it seems all confidence isn’t lost around the NBA.

Appearing on Bill Simmons’s podcast, NBA insider Chris Mannix hinted the perceived value for Ben Simmons among fans might be a lot lower than how teams around the league view him.

“I hear from executives all the time that are loving this ‘Ben Simmons trade value has cratered’ conversation because they hope that Philadelphia believes that. I think his trade value is actually higher than what’s being publicly portrayed. But you’re going to continue to hear a lot of the negativity around Ben Simmons…I think people value him pretty high across the league because I do think there’s a belief that someone’s going to figure the shooting thing out.”

It’s understandable why teams would still be high on Simmons. He is one of the best defenders in the NBA< capable of guarding any position on the floor. He also displays strong vision and routinely finds ways to find teammates who have the best shot.

While there might be some pushback from fans who would be upset about their club acquiring Simmons, he is an impact player that would make almost any team better. Plus, considering his youth, he is someone both contenders and rebuilding teams could value equally.

With that said, believing that someone else can miraculously solve his shooting issues is a remarkable stretch of hubris. That kind of thinking is captured perfectly by Tobias Funke from Arrested Development. Coaches and general managers out there believe, after seeing it never work for the 76ers, it might work for them. 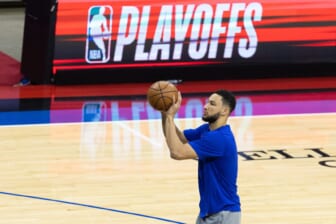 A Ben Simmons trade is in the best interest of all parties and a change of scenery could help him turn things around. But the same reaction executives have to fans’ perception of Simmons is shared when fans hear about anonymous teams thinking they can make him a shooter.