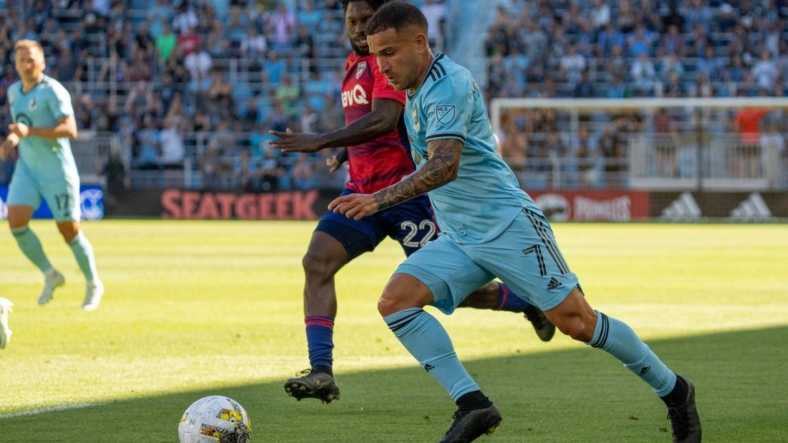 Two teams in the hunt for a Western Conference home playoff game meet on Saturday night when Minnesota United visit Portland to take on the Timbers.

The Loons (13-11-5, 44 points) come into the contest in fifth place, one point behind fourth-place Nashville (12-9-9, 45) and two points behind third-place FC Dallas, both of which have played one more game.

The conference champion gets a bye while the second- through fourth-place teams host a first-round contest in the MLS Cup playoffs, which begin Oct. 15-17.

Making the task even more challenging for the Loons is they’ll have to do it without forward Franco Fragapane, who is third on the team in scoring (six goals, three assists). Emanuel Reynoso, a potential MVP candidate (10 goals, nine assists), is listed as questionable with a right ankle injury.

Fragapane is suspended for Saturday’s contest after picking up a red card in the loss to Dallas and for the LAFC contest because of yellow card accumulation. Reynoso is also just one yellow card shy of a suspension, but his right ankle, which had him hopping off the field in the 62nd minute of the FC Dallas loss, is the bigger issue.

“It’s swollen,” Minnesota United coach Adrian Heath told reporters earlier this week. “Outside ligament has a little bit of discoloration and it’s puffy at this moment of time. … It will be day-to-day most of the week.”

Portland (10-8-12, 42 points) enters the weekend in sixth place and has won three consecutive games, including a 2-1 victory over Atlanta United on Sunday. The Timbers scored both goals on penalty kicks by Santiago Moreno and Dairon Asprilla.

Portland should get a boost with the addition of highly-touted 20-year-old Colombian defender Juan Mosquera.

Mosquera signed in July from Independiente Medellin but has been unable to play because of visa problems. After resolution, he will be on the bench for Saturday night’s contest.

“Things worked out well to join this team and I am very happy,” Mosquera told oregonlive.com. “It’s a big challenge for me at my young age. I’m very happy and mainly excited to start playing the games and showcase who I am.”

This will be the second meeting between the two teams. The first on July 30 in Saint Paul, Minn., ended in a wild 4-4 draw with Timbers midfielder Sebastian Blanco scoring two goals. One came 13 seconds into the contest, the fourth-fastest goal in MLS history.

Portland is unbeaten (5-0-3) in its last eight home games dating back to a 2-0 loss to the Eastern Conference-leading Philadelphia Union on May 22.