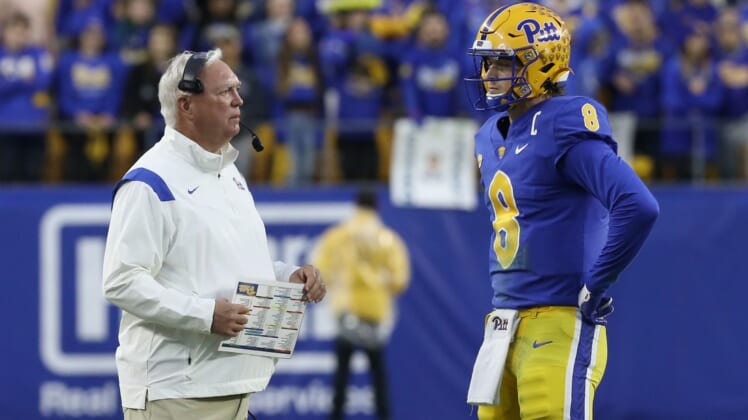 No reason was given by Whipple or the school. Whipple, 64, just completed his third season in the role. He will not coach the Panthers in the Peach Bowl vs. Michigan State.

“During his three seasons at Pitt, Mark Whipple was a great asset for our entire football program. He did a tremendous job transitioning us from a heavy run attack to one of the best passing games in the entire country,” Pitt head coach Pat Narduzzi said in a statement. “His great work with quarterbacks was obviously on full display, given the outstanding year Kenny Pickett has enjoyed.”

Whipple coached Pickett to an ACC-record 43 touchdown passes this season. Pickett threw for 4,319 yards as Pitt raced to its first ever ACC title. The Panthers had the nation’s No. 3 scoring offense.

The news comes amid a report that Whipple interviewed with Nebraska head coach Scott Frost on Sunday in the Phoenix area. The Lincoln Journal Star reported Whipple met with Frost in Chandler, Ariz., where Whipple was on a recruiting trip for Pitt.

Whipple’s contract at Pitt was up at the end of the season.