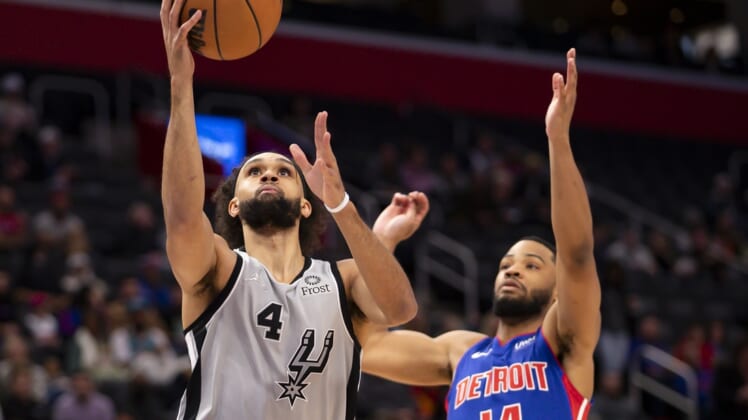 Saddiq Bey made a 3-pointer with 1.9 seconds left in overtime and the host Detroit Pistons ended a four-game losing streak by topping the San Antonio Spurs 117-116 on Saturday.

Hamidou Diallo had 34 points, 13 rebounds, five steals and four assists and Bey supplied 21 points and 17 rebounds. Luka Garza contributed 20 points and 14 rebounds and Cassius Stanley scored on a career-high 19 points for the PIstons, who had lost 18 of 19.

Bryn Forbes had a season-high 27 points for the Spurs. Devin Vassell had 19 points and Derrick White contributed 18 points and 14 assists.

Keldon Johnson gave San Antonio a two-point lead with a 3-pointer and 40.6 seconds left in overtime. Bey split two free throws and the Pistons missed two shot attempts after getting the rebound. White made one of two free throws with 10 seconds remaining.

Bey then drained his corner 3-pointer off a Walton feed. Johnson missed a 20-foot shot at the buzzer.

The Pistons had six players clear the league’s health and safety protocols on Friday but none were active due to reconditioning. The Spurs had four players out due to protocols.

Bey gave Detroit the lead, 73-71, on a three-point play with 4:41 left in the quarter. Justin Robinson scored five points in a 33-second span for an 82-75 Pistons advantage. Detroit led 85-81 entering the fourth.

San Antonio scored the first five points of the quarter but the Pistons responded with 10 unanswered points, including five from Bey.

Garza’s putback was answered by one Johnson free throw, tying the game once again. Both teams came up empty in their final regulation possessions.