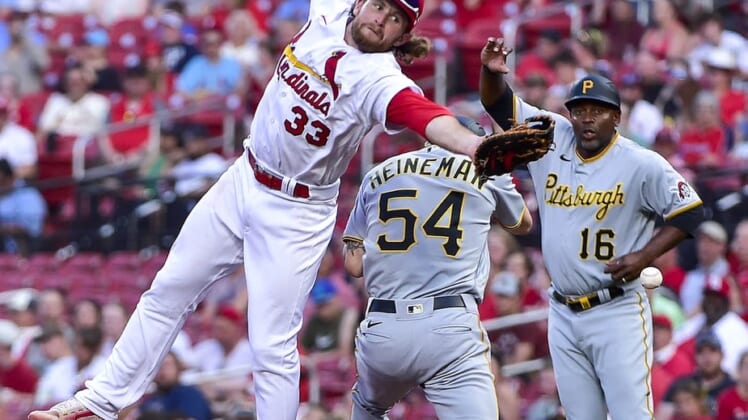 Wil Crowe (3-3) logged two scoreless innings of relief to earn the victory and David Bednar worked the final 2 2/3 innings to earn his 11th save.

In his first start of the season for the Cardinals after recovering from shoulder bursitis, Jack Flaherty worked three innings while hitting his 60-pitch target. He allowed four runs (two earned) on three hits, two walks and a hit batter.

Flaherty’s struggles continued in the second inning. Canaan Smith-Njigba drew a walk, then the Cardinals misplayed consecutive bunts by Tyler Heineman and Hoy Park to put the Pirates up 4-0.

Flaherty committed a throwing error on the first bunt, then Yadier Molina threw the ball away on the second.

The Cardinals got on the board in the bottom of the inning with Dylan Carlson’s homer.

Then the Cardinals knocked Contreras out of the game while tying the score 4-4 in the fifth inning. Harrison Bader led off with a triple before Tommy Edman drew a walk and Brendan Donovan hit a two-run double.

The Pirates retook the lead against Pallante in the seventh inning when Tucupita Marcano hit a two-out single and Reynolds launched his decisive homer.