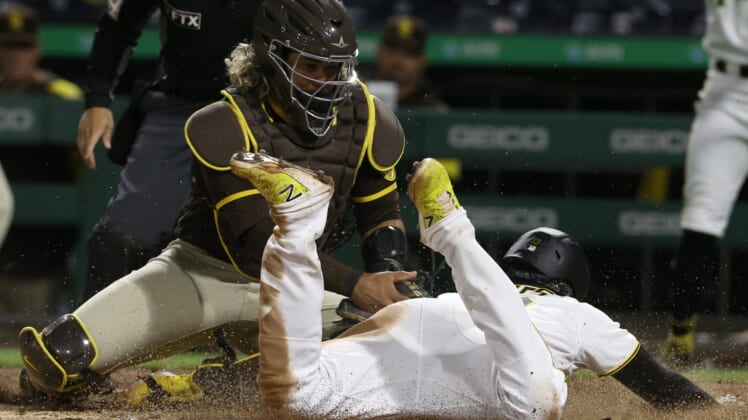 Ke’Bryan Hayes raced home from first as Brian Reynolds reached on an error in the 10th inning Saturday to give the Pittsburgh Pirates a 7-6 win over the visiting San Diego Padres.

After Trent Grisham’s RBI single in the top of the 10th gave San Diego a 6-5 lead, Jake Marisnick opened the bottom of the 10th on second. Hayes hit an RBI single up the middle off Luis Garcia (0-1) to tie it. Hayes raced home when first baseman Eric Hosmer’s fielding error allowed Reynolds to reach.

Hayes was called out, but that was overturned on review.

Michael Chavis hit a two-run homer and an RBI single and Josh VanMeter delivered an RBI double for the Pirates.

Pittsburgh starter JT Brubaker gave up three runs and five hits in five innings, with four strikeouts and one walk.

Chris Stratton (1-1) pitched the ninth and 10th for Pittsburgh to get the win.

Eric Hosmer hit a three-run homer and Manny Machado popped a two-run blast for the Padres.

In the first, Hayes singled to center and Reynolds walked. Chavis hit a ball that glanced off Manaea and into center for a base hit to drive in Hayes for a 1-0 Pittsburgh lead.

Jake Cronenworth opened the fourth with a double to right for the Padres. Machado drew a walk. After Jurickson Profar flied out, Hosmer launched his third homer to left to give San Diego a 3-1 lead.

Pittsburgh tied it in the fifth. Roberto Perez singled to left and scored on VanMeter’s double to right-center. Marisnick’s flyout to center moved VanMeter to third. Hayes walked before Reynolds beat out a potential double play at first, allowing VanMeter to score.

Cronenworth walked with one out in the eighth. That chased reliever Wil Crowe for David Bednar. Machado knocked a 97 mph fastball into the stands in center, his fourth homer, giving the Padres a 5-3 lead.

In the bottom of the eighth against reliever Steven Wilson, Reynolds singled ahead of Chavis’ third homer, to left, for a 5-5 tie.