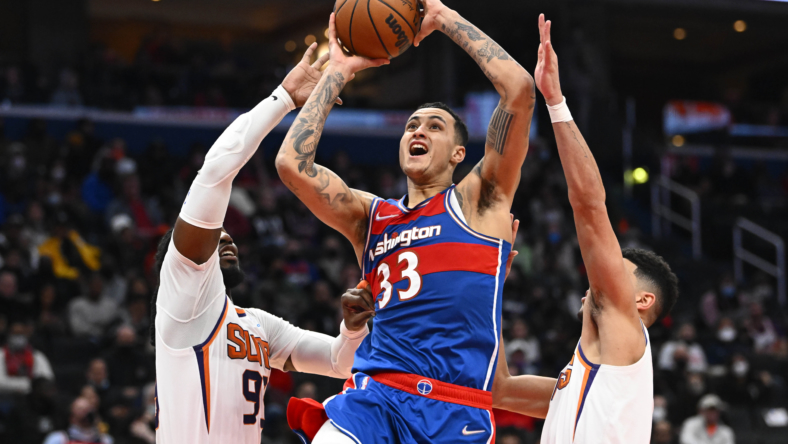 After the first four weeks of the 2022-23 NBA season, teams have finally figured out their strengths and weaknesses. The Phoenix Suns have distinct issues with their frontcourt depth, and Kyle Kuzma could be their answer.

Even with the Suns’ recent win against the New York Knicks, it’s evident that the team needs an additional scoring punch in the frontcourt. Although Deandre Ayton had a decent outing (13 points and 11 rebounds), he was the only frontcourt player that played well for Phoenix.

Before the season started, Cameron Johnson was bound to be a source of points for this year’s campaign. Plus, Jae Crowder’s refusal to play for the organization after two seasons punched a big hole in the team’s depth.

This time around, rumors have started circulating that the Suns’ front office has drawn interest in trading for a power forward. Kuzma of the Washington Wizards has been the name that’s been associated with Phoenix this season. The Suns need someone who can score alongside Ayton, and the Wizards’ forward could be their guy.

However, in their pursuit of Kuzma, Cam Johnson could revert to his sixth-man role when he returns from injury. The 6-foot-10 forward is a more well-rounded player, which makes him a better option than Johnson.

Before the start of the 77th NBA season, the Suns were stern in making Johnson their starting power forward. The move had mixed reactions from people since the Suns were willing to sacrifice a lot on defense with Johnson’s promotion. But it made sense when the Suns started playing him in the starting lineup during the preseason.

Kuzma is a valuable piece to the Wizards’ offense this season. He’s their third-leading scorer for this year’s campaign. In 16 games this season, the former Los Angeles Lakers forward is averaging 18.5 points, 8.1 rebounds, and 3.3 assists. Sadly, though, he isn’t consistent on the floor. The 27-year-old is making 44.8% of his shots on the field and 30.6% of his threes this season.

If we compare Johnson’s stats, the former 27th overall pick is playing better. The Suns’ forward averaged 13.0 points, 3.4 rebounds, and 1.8 assists before he got hurt. Efficiency-wise, the 26-year-old is a more effective scorer. He’s making 44.6% of his field goals and 43.1% of his three-pointers.

Based on their stats, we can see which player the Suns could favor if they traded for Kuzma. It’s also worth mentioning that Deandre Ayton’s rebounds have gone down this season, which makes pairing him with Kuz a more logical move.

The Wizards’ four-man is also a more reliable defender than Johnson. He’s a more sizeable player physically and more capable of being a tough interior rebounder. Given his rebounding stats, he can assist Ayton’s lack of rebounding effort this season.

For Phoenix to be a winning team, sacrifices have to be made. We’re not discrediting what Johnson has done for the team this season. But his presence as the team’s sparkplug off the bench could be the help the team needs this season.

The Suns are currently second in the Western Conference with a record of 10-6, which is quite impressive given the injured players they’ve accumulated since the start of the season. Their state could all be improved if the front office carefully considers trading for Kuzma.