Phoenix Suns beat Oklahoma City Thunder to tie for No. 1 spot in West 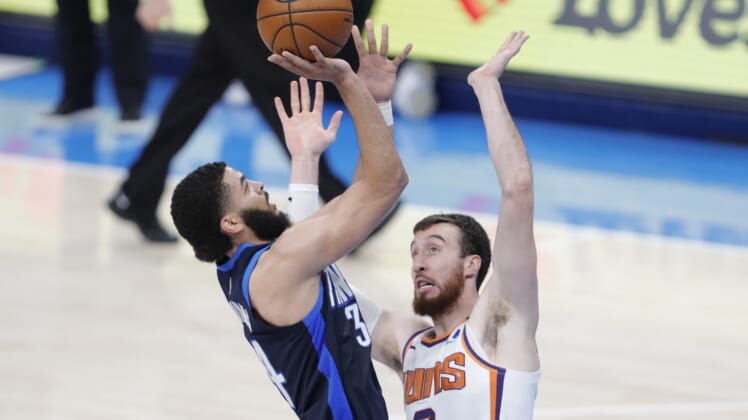 Devin Booker scored 32 points to lead the Phoenix Suns to a 123-120 road win over the Oklahoma City Thunder on Sunday night.

The Suns (46-18) extended their winning streak to four, moving into a tie with the Utah Jazz for the top spot in the Western Conference. Phoenix holds the tiebreaker.

A night after sustaining the largest home loss in NBA history — a 152-95 loss to Indiana — the Thunder stayed within striking distance much of the night.

The Suns led by 16 with 3:29 to play but the Thunder reeled off a 14-2 run to move within four with 36.8 seconds left. It looked like Phoenix’s lead would shrink even further when Booker was called for a foul on Luguentz Dort with 16 seconds left as Dort elevated for a 3-pointer.

But Suns coach Monty Williams challenged the call, it was overturned and Phoenix won the jump, with Mikal Bridges putting the game away at the free-throw line with six seconds left.

The loss was Oklahoma City’s 20th in 22 games and its third in a row.

The win was Phoenix’s first in Oklahoma City since Dec. 19, 2010, snapping a 16-game losing streak in the arena.

Booker helped the Suns steadily stretch the lead in the third quarter, going 5 of 6 from the floor, scoring 14 of his points in the quarter. Nine of Booker’s points came in a 24-11 run that stretched
Phoenix’s lead to 17 late in the third. The Suns led by as many as 18 in the fourth before the Thunder charged back.

Theo Maledon scored seven of his 18 points in the final 2:30, including a pair of 3-pointers that helped give him the Oklahoma City record for 3-pointers in a season for a rookie. He has 96.

Chris Paul, playing his first game in Oklahoma City since being traded the Thunder in the offseason, had 18 points and 11 assists while Torrey Craig also scored 18.