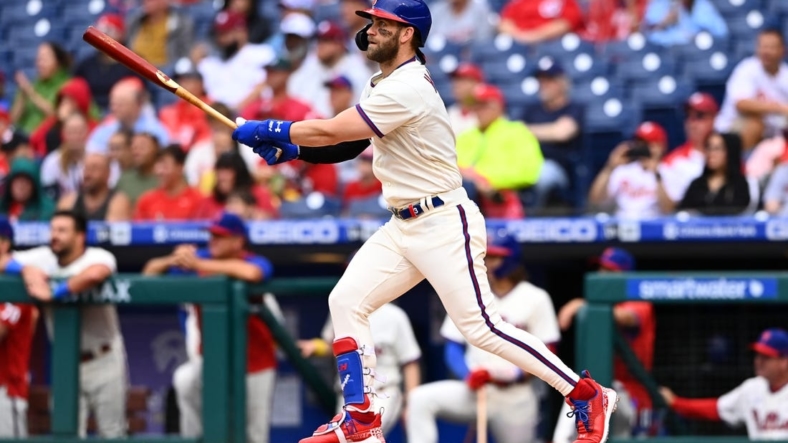 Alec Bohm hit a tiebreaking homer in the seventh inning for the host Philadelphia Phillies, who overcame a three-run deficit in addition to the longest in-game rain delay in franchise history to complete a three-game sweep of the Washington Nationals with a 7-5 victory on Sunday.

The Phillies (78-62) increased their lead over the San Diego Padres to 1 1/2 games in the race for the second wild-card spot in the National League. The Padres (77-64) lost to the Los Angeles Dodgers 11-2 on Sunday.

Bryce Harper hit an RBI double in the first and Aaron Nola tossed two scoreless innings for the Phillies before the heavy rain arrived. A delay of 3 hours and 36 minutes followed. It was the longest rain delay of any kind in a home game for Philadelphia.

The only two longer delays in franchise history both happened prior to first pitch. Philadelphia and Washington sat through a 4-hour, 27-minute delay prior to a game on Sept. 28, 2006, while a delay of 3 hours and 51 minutes preceded the Phillies’ game against the Colorado Rockies on June 15, 1995.

On Sunday, Cristopher Sanchez relieved Nola and gave up a run in the third, when Luke Voit delivered an RBI double, and three runs in the fourth on run-scoring singles by Cesar Hernandez, Ildemaro Vargas and Joey Meneses.

Rhys Hoskins tied the game by hitting a three-run homer in the fifth. Meneses and Hoskins swapped sacrifice flies in the sixth before J.T. Realmuto led off the seventh by singling against Kyle Finnegan (5-4). Bohm homered to right field four pitches later.

Jose Alvarado (4-2) earned the win with a perfect seventh inning. Seranthony Dominguez tossed a perfect eighth and David Robertson earned his 19th save by striking out all three batters he faced in the ninth, including Nelson Cruz to end the game just over seven hours after first pitch.

Nola allowed two hits and struck out two. Nationals starter Anibal Sanchez gave up one run on two hits while walking three and striking out none over two innings.