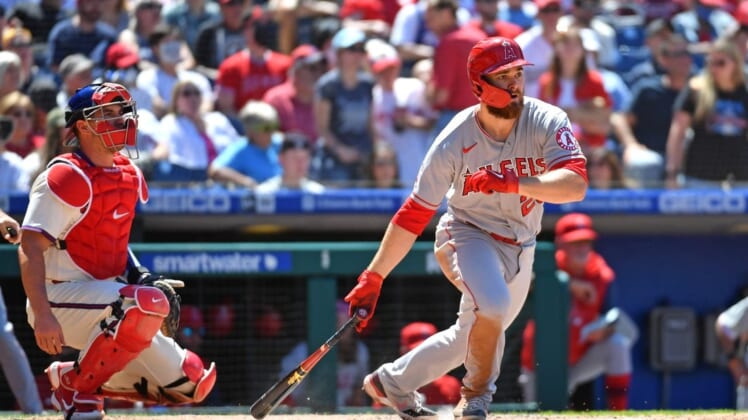 Bryson Stott hit a three-run, walk-off homer off Jimmy Herget with two outs in the bottom of the ninth inning to lift the host Philadelphia Phillies past the Los Angeles Angels 9-7 on Sunday.

Bryce Harper hit a grand slam, single and drove in four runs for the Phillies, who won their fourth in a row. Interim manager Rob Thomson has won all three games since replacing Joe Girardi.

Matt Duffy’s RBI single off Knebel in the ninth had given the Angels a short-lived 7-6 advantage.

Duffy had two hits, Jared Walsh added a single and two RBI and Kurt Suzuki contributed two hits and an RBI for the Angels, who have dropped 11 consecutive games.

In the fourth, the Angels loaded the bases with no outs and Walsh lined a two-run single to right for a 2-0 advantage. Jo Adell followed with an RBI infield single and Suzuki added an RBI single for a 4-0 lead. The Angels scored a fifth run on a fielder’s choice and an RBI by Tyler Wade.

The Phillies closed within 5-1 in the fifth when Nick Castellanos lofted a sacrifice fly to right, scoring Rhys Hoskins. Realmuto then hit an RBI groundout to cut the deficit to 5-2.

Mike Trout grounded out to deep in the hole to shortstop in the eighth, but Stott made a strong throw and extended Trout’s hitless streak to 0 for 26.

Brandon Marsh hit an RBI single later in the eighth for a 6-2 lead.

With one out in the eighth, the Phillies loaded the bases. Hoskins struck out swinging and Harper launched a grand slam off Iglesias to tie the game at 6. It was the sixth career grand slam of Harper’s career.