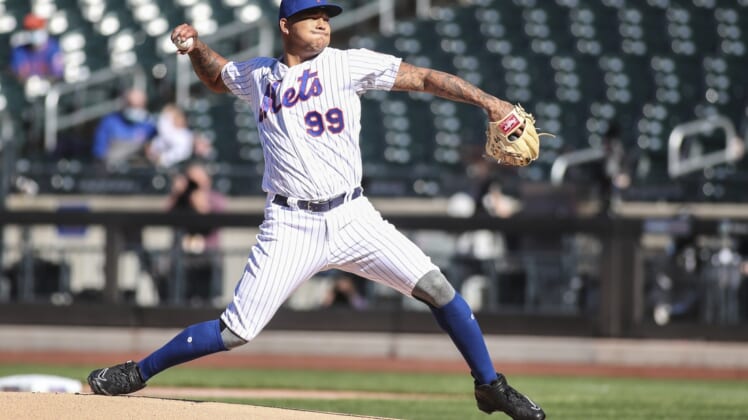 Jonathan Villar hit a walk-off single with one out in the bottom of the eighth inning to lift the host New York Mets past the Philadelphia Phillies 4-3 in the first game of a doubleheader Tuesday.

Pete Alonso singled home Francisco Lindor earlier in the eighth as the Mets rallied for the win.

Dominic Smith homered and drove in two runs for the Mets.

Mets starter Taijuan Walker allowed three hits and one run in 4 1/3 innings. He struck out eight and walked three.

Trevor May (1-1) earned the victory in relief.

Didi Gregorius finished with two hits for the Phillies and has hit safely in all 10 games this season.

Hector Neris took the loss (0-1) by allowing both runs in the eighth.

The Mets jumped out to a 2-0 lead in the first inning when Smith crushed a two-run home run to right-center field.

The Phillies sliced the lead in half in the second after Andrew Knapp hit a sacrifice fly to left, which scored Alec Bohm.

Lindor reached second with one out in the third, but Anderson struck out Alonso looking and then induced a soft groundout by Jeff McNeil.

In the fourth, the Phillies had runners on first and second with one out, but Segura grounded into a 4-6-3 double play to end the threat.

The Phillies had another potential scoring opportunity in the fifth. Roman Quinn attempted to steal third yet slid off the base and was called out. It snapped a streak of 22 consecutive stolen bases for Quinn.

Segura hit an infield single in the sixth to score Rhys Hoskins and equalize at 2.