The first event of the 2023 calendar year for the PGA Tour ended on Sunday with Jon Rahm rallying back from nine strokes down to win at the Sentry Tournament of Champions at the Plantation Course at Kapalua in Maui, Hawaii.

Rahm took the lead on the back nine with an eagle on the 15th hole to cap off a stretch of shooting 5-under in four holes and eventually finished his final round with a 10-under 63 for a four-round score of -27.

This is Rahm’s first win at the Sentry Tournament of Champions after having two previous second-place finishes, including when he ended last year’s tournament six shots better than this year.

Collin Morikawa, who had a six-shot lead entering Sunday, faltered as he made three consecutive bogeys on holes 14, 15 and 16.

After every PGA Tour event this year, leading up to the Tour Championship in August, we will unveil a top 10 rankings each week:

Will Zalatoris made his return after not playing since the BMW Championship in August after being diagnosed with two herniated disks in his back.

Zalatoris shot three 69s to begin the tournament and ended Sunday with an 8-under 65 to finished tied for 11th at -20.

“Overall, shooting 20-under my first four rounds back, I’ll take that,” Zalatoris said.

The Sentry Tournament of Champions was a good marker for Zalatoris to see where he is as he travels back to the mainland to recuperate and prepare for the American Express Open that begins on Jan. 19, kicking off the West Coast swing.

The key for Patrick Cantlay last week was if he was going to  get off to a good start like last year. Unfortunately, that was not the case as he started with a couple of three-under 70s on Thursday and Friday.

Cantlay’s best round came on Saturday when he fired a 7-under 66 that included five birdies on the back nine. However, it was not enough to have chance at the top as he finished 18-under par and tied for 16th. 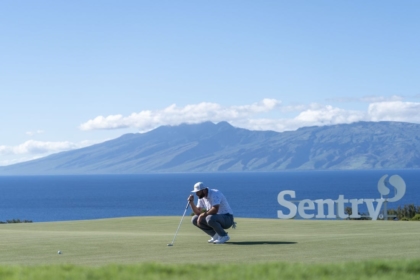 Kapalua has always been a course – at this time in the PGA Tour schedule – for players to see where they’re at as the first event of the season takes a place with a time to change things ahead of some of the bigger tournaments as the year progresses.

Tony Finau shot all four rounds in the 60 at Kapalua but could not quite make a run for the trophy.

Having a couple of 4-under 69s in the second and third rounds did not help Finau, but overall he had a good showing to kick off the 2023 campaign. Finau recorded a 7-under 66 to close his round on Sunday and earn a seventh place finish with three other golfers at 21-under par.

Tom Kim continues to impress since he made his mark for the International Team during the Presidents Cup back in September.

At the Sentry Tournament of Champions, Kim shot all four rounds in the 60s, highlighted by his opening round 8-under 65 en route to a 22-under par finish and a fifth-place tie with J.J. Spaun.

Despite a bogey on the par-4 first hole, Kim would come alive, especially on the back nine, making birdies on three consecutive holes and on five of the final seven holes to end his appearance at Kapalua.

The time in Hawaii continues for Kim this week as he will compete at the Sony Open at the Waialae Country Club in Honolulu.

Max Homa continued to improve on his hot finish from 2022 into the new year.

Despite shooting back-to-back 70s during the first two rounds, Homa, like Cantlay, rallied by firing a 10-under 63 on Saturday and a 7-under 66 on Sunday to put him in a tie for third with Tom Hoge at 23-under.

Homa had the shot of the day during the final round after making a 102-yard shot to give him an eagle on the par-4 13th.

With a win already under his belt this season, this top-3 finish continues to put him in prime position in the FedEx Cup Standings.

Matt Fitzpatrick had a good showing but was unable to remain a factor in the title chase on Sunday. Despite having a final round 3-under 70 and a 4-under 69 on Friday, Fitzpatrick dialed a couple of 66s in his first and third rounds.

Fitzpatrick had the makings of a possible run with an eagle on the par-5 fifth hole but then went just 1-under the rest of way.

The Englishman is in a solid position as he moved up 56 spots in the FedEx Cup Standings and has time to prepare his game with the tournaments along the west coast and in Arizona over the month.

Collin Morikawa was looking poised and in the zone for the 54 holes of golf. Well, that was until his chip on the 18th hole was chunked. Although he made par to end his day on Saturday, his woes, even with a six-shot lead entering Sunday’s action, came alive as his short game was his Achilles heel.

Morikawa had multiple chip shots and putts to give him opportunities to run away with the trophy but could not capitalize. That included making his first bogey of the tournament on the 14th hole and going on to lose a stroke on the next two holes.

Seeing Morikawa before the 18th hole on Saturday made it seem like he had risen out of the funk that bedeviled him last year. He made six straight birdies to open his back nine on Thursday, made birdies on four the first five on Friday and was able to knock down an 11-foot putt for eagle on the fifth hole in the third round.

The pieces were there for Morikawa and like any golfer who has surrendered a large lead with 18 holes left to play, it is all about staying in the moment and focusing on making that next shot better for yourself.

Rory McIlroy did not play this week in Hawaii but still remains on this ranking after the conclusion of 2022. 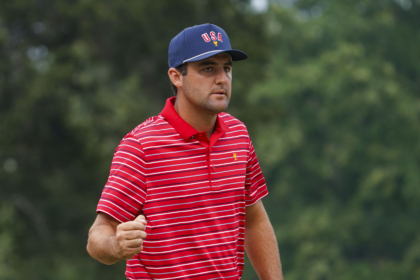 He has had 12 opportunities to come to Kapalua, including this year, but has only played once in 2019. McIlroy probably wants to rest up for the remainder of the season as he is also competing in a couple of DP World events, including the Dubai Desert Classic at the end of the month.

Like Fitzpatrick, Scheffler did not have a signature round on Sunday to reach the top of the leaderboard as he shot a 3-under 70 and was part of the group with Fitzpatrick, Finau and K.H. Lee at 21-under par for the tournament.

Scheffler started the week strong by going 66-66 over his first two rounds but could not finish the job over the weekend.

On Sunday and throughout the week, Scheffler, like some other golfers, could get on top of the ridge at the 15th hole resulting in pars and bogeys as a ball would roll 30-40 yards off the green.

The hills played a big factor in the outcome of the tournament and the player who was going to hit their spots and make the least number of mistakes was going to win.

Not only was Jon Rahm able to limit the mistakes, but he was able to get into a rhythm, especially after the bogey on the first hole on Sunday the helped him win the Sentry title.

“At that point, it’s not like winning is really that in mind, just got to get to work and start making birdies and that’s what I did,” Rahm said moments after finding out he won the tournament. “That stretch of four through six, making those three birdies, birdieing nine allowed me to get into a rhythm. Then, obviously, the stretch of 12 through 15 was very important as well.”

Rahm, who won his third tournament in the last four starts, closed out his round on the 18th hole with a birdie putt to give himself a three-shot lead over Morikawa.

The Spaniard, who secured his eighth career PGA Tour victory, moved up 72 spots in the FedEx Cup Standings all the way up to No. 4.

In addition, his 10-under 63 on Sunday tied Homa’s third round 63 for the best round of the tournament.