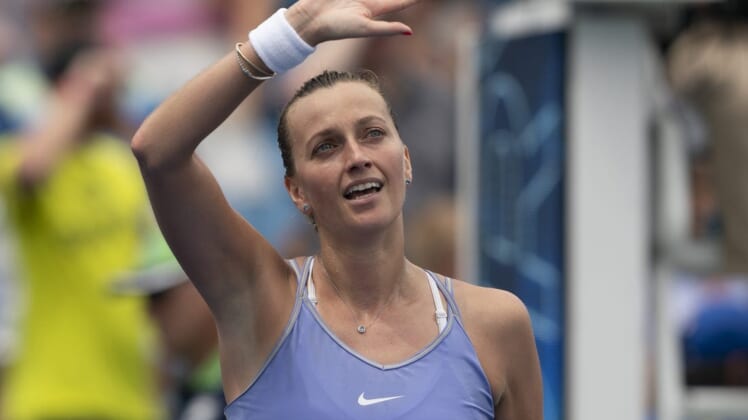 Petra Kvitova converted 81.5 percent of her first-serve points and rallied to beat Madison Keys 6-7 (6), 6-4, 6-3 on Saturday to reach the championship match of the Western & Southern Open at Mason, Ohio.

Kvitova won for the first time in three semifinal trips at the Cincinnati-area event. She prevailed in two hours and 19 minutes.

The Czech Republic star will be seeking her 30th career WTA title when she faces red-hot Caroline Garcia of France in the final. Garcia defeated sixth-seeded Aryna Sabalenka of Belarus 6-2, 4-6, 6-1 in a match that was twice interrupted by rain delays.

Kvitova previously lost in the semifinals of the event in 2012 and 2018. This time, she dropped a close opening set before overpowering Keys for most of the final two sets.

“It was an incredible battle,” Kvitova said during a press conference. “I have to say Madison played a really great match. It was a really, really tight one.

“This is very special, to be honest. I was going to the match today, and I was telling myself that I have never been in the final here. … I had many, many finals but never here. So finally it’s here. Actually, who knows how it will end tomorrow, but this is already a big step for me.”

Kvitova is 29-10 in finals during a career in which she has won two Wimbledon crowns.

Garcia advanced into the main draw of the event through qualifying and has since knocked off three players ranked in the top 10 — No. 4 Maria Sakkari of Greece in the second round, No. 8 Jessica Pegula in the quarterfinals and now No. 7 Sabalenka in the semis.

“I guess no one expected it, that’s for sure,” Garcia said afterward. “It’s a long way to come from qualies.”

Garcia has won 26 matches since the start of June, including titles in Bad Homburg and Warsaw.

Sunday’s win makes her the first qualifier to reach the finals in a WTA 1000 event. The former World No. 4 has won nine career WTA titles.

Garcia’s serving was part of the difference against Sabalenka. She had eight aces and one double fault while Sabalenka had four aces against seven double faults.

The second rain delay occurred with Garcia leading 3-1. She wasted no time finishing off Sabalenka after play resumed.

“First, to be in the final of a 1000 event after so many years, and the scenario of today was just unbelievable,” Garcia said. “We had to stop a few times. We never know when we will come back. It was a long wait, and in the wait you never know what you are supposed to do, so it was tough.

“I’m very happy with the last preparation for the comeback at 3-1. I was really ready for every point. It made the difference.”