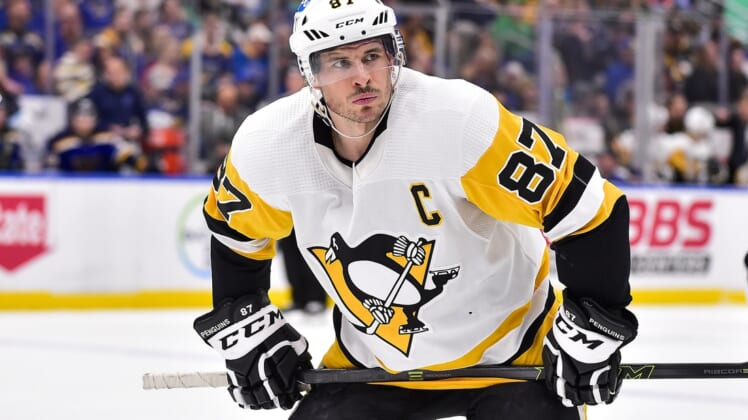 For the past seven games in a row, the Pittsburgh Penguins faced teams in position to make the playoffs. Now comes a game Saturday against the Arizona Coyotes in Phoenix.

The Coyotes are one of the worst teams in the NHL and have just a little more than half the Penguins’ point total, but they aren’t playing like it, so it doesn’t seem likely Pittsburgh can count on getting a break.

Arizona is coming off a 4-1 road trip, including a 6-3 win Tuesday at Montreal.

The Penguins were 4-2-1 in that seven-game stretch against prospective fellow playoff teams, including a 3-2 shootout win Thursday at St. Louis.

Both teams are on various radars with the league trade deadline looming Monday and could pull the trigger on a move or two even before puck drop, but in the meantime both teams are feeling pretty good about things.

Pittsburgh is closing out a three-game road trip that began with a 4-1 loss in Nashville after which coach Mike Sullivan said his club played well enough to win but just couldn’t find the net.

Against the Blues, the Penguins solved some of their secondary scoring concerns for a game at least by getting both regulation goals from defensemen before winger Bryan Rust was the only player to score in the shootout.

One area where Pittsburgh has shored things up is on the penalty kill. After being ranked among the top three or four, and for a stretch first, in the NHL for most of the season, the Penguins dipped to 73.7 percent efficiency when top penalty killer Teddy Blueger was out after surgery for a broken jaw. In his five games back, the team has given up just one power-play goal.

“When we have been in our end, they’re just doing a great job pressuring pucks and forcing power plays to make good plays to beat us,” Sullivan said. “And when the power play goes (make good plays), the goaltender … has been there to make the save for us.”

In terms of five-on-five play, Sullivan has been shuffling forward lines and defensive pairings in recent games, looking for more offense.

“We’re trying to put combinations together that give us the balance that we need,” he said.

Arizona, meanwhile, is finding plenty of balance in most areas.

Over their past two games, the Coyotes have scored 11 goals on 34 shots, leading coach Andre Tourigny to crack that, “Obviously, our shooting percentage on that trip is probably the best in the history of the league.”

It’s a lot easier to be loose and joke around when a team is winning after a mostly dismal season, apparently.

“I think when we started the season, it was a work in progress,” said Arizona defenseman Anton Stralman. “New coaching staff … and new systems. It was a rough beginning, but I think as the season has moved along we never really lost any morale.

“The atmosphere in the (locker) room has stayed even-keel, and we’ve just worked at our game. Now it’s starting to pay off for us a little bit, which is what we want.”