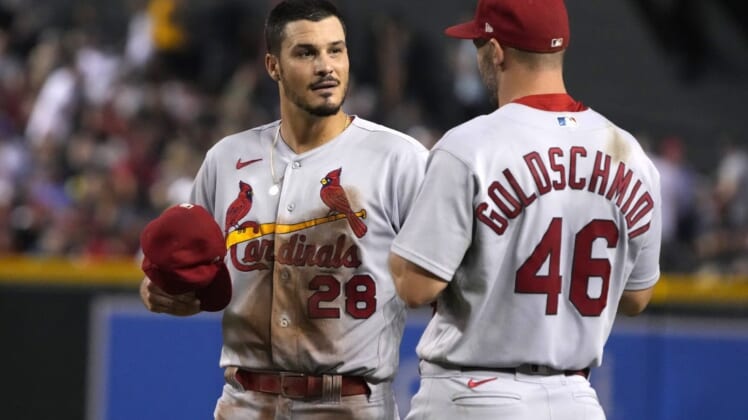 He will look to add to his resume when the St. Louis Cardinals visit the Arizona Diamondbacks on Saturday night in the middle contest of a three-game series at Phoenix.

Goldschmidt tormented his former ballclub on Friday by going 3-for-4 with a homer, two RBIs, two runs and a walk in the Cardinals’ 5-1 victory.

Goldschmidt’s homer was his 30th of the season, marking the seventh time he has reached that milestonein his career. He is tied for third in the NL in homers, ranks second with 96 RBIs and leads the majors with a .339 batting average.

Teammate Nolan Arenado, who went 4-for-5 with three doubles and two RBIs on Friday, said Goldschmidt should be en route to winning his first MVP award.

“He’s the best player in the game,” Arenado said in a postgame television interview. “That’s just what it is, and I stand by that comment with a lot of confidence. It’s not just hitting and defense, it’s baserunning, it’s all the little things. He’s a five-tool player.”

Goldschmidt, who was MVP runner-up twice (2013 and 2015) with Arizona, isn’t interested in savoring a standout season when there are still 44 regular-season games remaining on the Cardinals’ schedule.

“Every year is different. I’ve played well, but I’ve still had my ups and downs,” Goldschmidt said after homering for the fifth time in 17 career games against Arizona. “There’s still a long way to go and I try to take it day by day. I try to play well when I do and still try to enjoy it when I don’t.”

Arizona has won eight of its past 13 games despite Friday’s loss.

The Diamondbacks had just four hits, two by Josh Rojas.

Rookie center fielder Alek Thomas was held out after going 0-for-4 and dropping a fly ball against the San Francisco Giants on Thursday. Thomas is 2-for-27 with eight strikeouts over his past eight appearances.

“He’s a young player,” Arizona manager Torey Lovullo told reporters. “He’s learning and growing every single day. Sometimes you have to pull back and take your foot off the gas pedal.”

Struggling left-hander Madison Bumgarner (6-12, 4.37 ERA) will start for the Diamondbacks on Saturday and right-hander Dakota Hudson (6-6, 4.17) will pitch for the Cardinals.

The 33-year-old lost to the Giants on Monday when he gave up a season-worst six earned runs as well as eight hits over 5 2/3 innings.

Bumgarner defeated the Cardinals on April 29 after allowing one run and three hits in five innings. He is 5-6 with a 5.26 ERA in 14 career starts against St. Louis.

Goldschmidt is batting .342 with four homers, 15 RBIs and 12 walks in 73 career at-bats against Bumgarner. Arenado has three homers while hitting .262 in 65 at-bats.

Hudson is winless in his past six starts and has a 5.10 ERA during the stretch. The 27-year-old last pitched Aug. 11 when he gave up two runs and four hits over five innings in a no-decision against the Colorado Rockies.

Hudson beat Arizona on April 28 when he gave up one hit over six scoreless innings. He is 2-0 with a 1.50 ERA in two career starts versus the Diamondbacks.