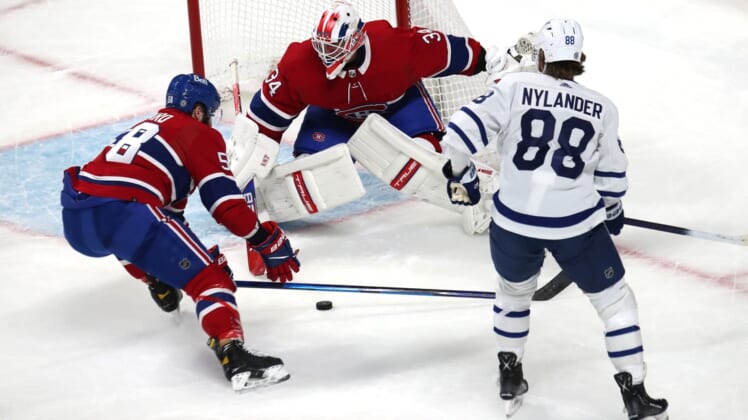 Paul Byron scored the go-ahead goal at 17:32 of the third period, and the Montreal Canadiens went on to defeat the visiting Toronto Maple Leafs 4-2 Saturday night.

Byron lugged the puck down the right wing and took the shot for his fourth goal off the season on a 3-on-1 breakout. He also earned an assist on Christian Dvorak’s eighth goal of the season into an empty net at 19:37 of the third period.

Jake Allen was superb in goal with 49 saves for the Canadiens, who lead the season series between the teams 2-1.

David Savard added a goal and an assist for Montreal, Cole Caufield also scored, and Nick Suzuki had two assists.

Auston Matthews matched his career-best with his 47th goal for Toronto. The goal gave him a career-best 81 points for the season. William Nylander also scored for Toronto. Mitchell Marner added two assists, and Erik Kallgren made 14 saves.

Matthews scored on a shot from the left circle 36 seconds into the first period, converting a short pass from Michael Bunting.

Dvorak put the puck in the net at 4:18 of the second period, but a video review determined the Canadiens had been offside.

Montreal tied the game at 9:44 of the second period. Savard scored his third goal of the season from the low slot, set up by Laurent Dauphin’s pass from the left circle.

Caufield scored his 14th goal of the season at 18:08 of the second on a power play. Seconds after he missed from close range after splitting the defense, Caufield made no mistake with his shot from the left circle on Chris Wideman’s pass. Justin Holl was off for interference.

Nylander scored his 24th goal of the season from the edge of the crease at 7:33 of the third period on a power play. Dvorak was off for holding.