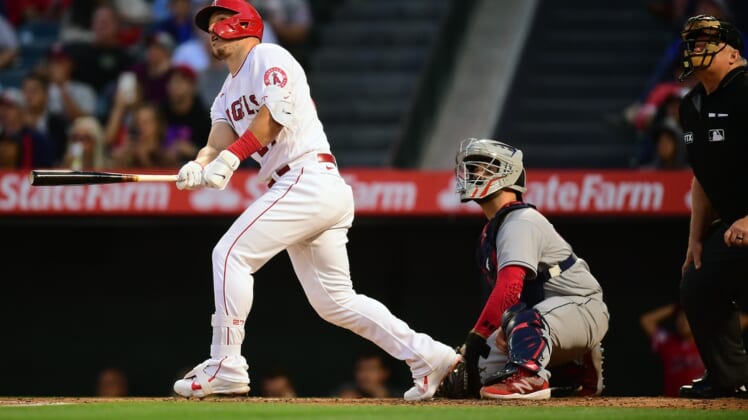 It was the second consecutive scoreless start by an Angels starter against the Guardians. Michael Lorenzen threw six scoreless on Monday in a 3-0 win, and Sandoval did him one better, getting through seven innings.

In fact, Sandoval (1-0) has not allowed an earned run all season. He gave up one unearned run in each of his first two starts, both of which lasted four innings.

Sandoval threw 90 pitches Tuesday, striking out nine, walking one and giving up just two hits — both singles. He became the first pitcher in Angels history to have 20 strikeouts and not allow an earned run in his first three starts in a season.

The Angels lost the shutout in the ninth inning on Jose Ramirez’s RBI double, ending a streak of 17 scoreless innings by the Guardians’ offense.

Angels closer Raisel Iglesias entered the game with one on and one out in the ninth and got the final two outs for his fourth save.

The Angels had eight hits in the game, including the two by Trout and two doubles by Anthony Rendon, who also made a spectacular defensive play on a one-hop liner by Ernie Clement in the fifth inning.

The Angels took a 1-0 lead against starter Triston McKenzie (0-2) in the second inning. Rendon doubled with one out and scored on a single by Brandon Marsh.

Marsh, who leads the team with 14 RBIs, was back in the lineup, 10 pounds lighter after missing the previous two games because of a stomach bug.

The Angels increased their lead to 3-0 in the third after Taylor Ward singled and Trout hit the two-run homer. The homer was Trout’s 160th at Angel Stadium, tying Tim Salmon for the most in franchise history.

Trout doubled in a run in his next at-bat, in the fifth inning, also against McKenzie. That made it 4-0.

McKenzie gave up four runs and seven hits in 5 2/3 innings, with six strikeouts and no walks.