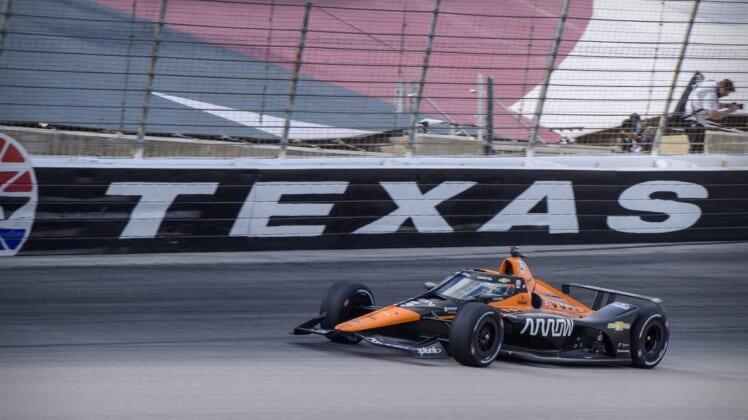 O’Ward, 21, has been a full-time series driver since 2019 and landed inside the top three five times — including Saturday at the same track — but had never won.

O’Ward passed Josef Newgarden with 24 laps to go and hung on to best him by a margin of 1.2443 seconds at the 1.5-mile oval in Fort Worth.

According to IndyCar, a Mexican driver had not won a series race since Adrian Fernandez in 2004.

“That was long race, but we had so much pace in the Arrow McLaren SP No. 5,” O’Ward said. “We got the job done today, man. I couldn’t be happier for (our) group of guys. It’s Texas. It’s very close to my heart. Many Mexicans were out there in the grandstands, so thank you guys so much.”

O’Ward led for 25 laps, mostly comprised of the final 24 once he passed two-time series champ Newgarden. Dixon led for 163 of the 248 laps.

It was the second IndyCar race of the weekend at Texas Motor Speedway. Dixon won the Genesys 300 on Saturday. O’Ward finished third.

The series is off until May 15, when drivers head to Indianapolis Motor Speedway for the GMR Grand Prix. The 105th running of the Indianapolis 500 follows on May 30.