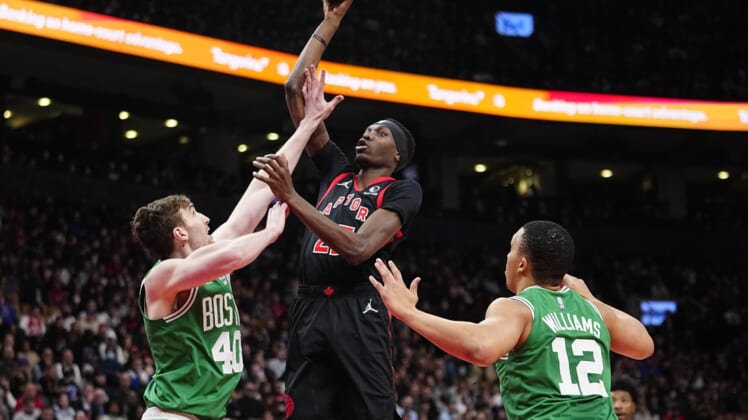 Pascal Siakam scored four of his season-best 40 points in overtime before fouling out and added 13 rebounds as the host Toronto Raptors defeated the undermanned Boston Celtics 115-112 Monday night.

Fred VanVleet and OG Anunoby each added 14 points for the Raptors, who have won the first three games of a four-game homestand.

Gary Trent Jr. and Thaddeus Young each scored 12 points. Scottie Barnes had 10 points before fouling out late in the fourth quarter.

Marcus Smart had 28 points for the Celtics, who had a six-game winning streak come to a halt. Grant Williams added 17 points, Derrick White had 15, Daniel Theis had 13 points and 10 rebounds, Aaron Nesmith had 13 points and Payton Pritchard and Sam Hauser had 10 points each.

The game was tied after three quarters. Boston opened the fourth quarter with a 9-2 burst. Anunoby tied the game on a layup with 1:55 left. Boston took a four-point lead on Nesmith’s 3-pointer with 57.9 seconds remaining. Siakam tied the game at 106 with two free throws with 12.6 seconds to play to force overtime.

Boston led 38-30 after one quarter after being ahead by as many as 11.

Boston started the third quarter on a 9-1 run. Toronto responded with an 8-0 surge. Trent’s layup ended the third-quarter scoring and tied the game at 80.

Toronto was without Khem Birch (knee) and Malachi Flynn (hamstring).