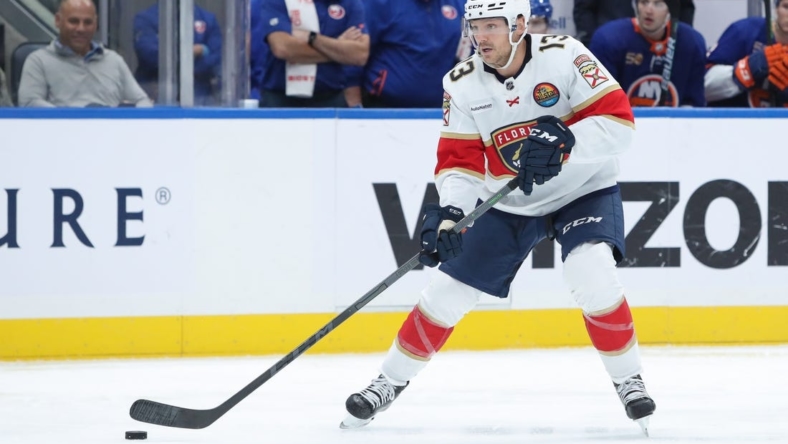 Matthew Tkachuk, who leads the Florida Panthers in assists (12) and points (17), will serve the second and final game of his NHL suspension on Wednesday night when his squad hosts the Carolina Hurricanes in Sunrise, Fla.

While it’s never ideal to lose a leading scorer, the Panthers might have found a silver lining.

After Tkachuk was penalized and later suspended for a dangerous hick-stick of Los Angeles Kings goalie Jonathan Quick on Saturday, Panthers coach Paul Maurice went to work on reshaping his lines.

On Sunday, Maurice put Sam Reinhart and Anton Lundell together on the second line, and it clicked in a 5-3 win over the host Anaheim Ducks.

Reinhart, who had been slumping, had two goals, and Lundell had a pair of assists as the Panthers closed their four-game trip with a 2-2-0 record.

“Sam and Anton are back together, and they know how to play off each other,” Maurice said. “When Matthew comes back, I’ve got a different set of lines than I did a couple of days ago.

“Sunday was a great learning experience for our team, finding something new.”

Mixing up the lines was big for Reinhart, who scored a career-high 33 goals last season but was scoreless in the first dozen games of this campaign.

Then, in his 13th game, which happened to be his 27th birthday, Reinhart finally found the back of the net — twice.

Maurice indicated that Reinhart’s scoreless streak was just bad luck and no big correction was required.

“Sam had so many chances to score, and it just didn’t go for him,” Maurice said of Reinhart’s first 12 games of the season. “His game has been right.”

While the Panthers hope to have found something good with their new lines, the Hurricanes have won four of their past five games, including three that went past regulation.

“We’re sticking with it all the way through the end,” Jordan Staal said of the Canes’ 3-1 record in games that have gone into overtime or shootout.

And, despite a 3-1 home loss to the Toronto Maple Leafs on Sunday, the Hurricanes have scored a power-play goal in four straight games. That’s a feat the Canes never accomplished last season.

The Hurricanes have two 33-year-old goalies in Frederik Andersen and Antti Raanta.

Andersen won 35 games last season, the fifth time he has eclipsed 30 victories. This season, he is 5-3-0 with a 2.72 goals-against average that is a shade behind his 2.59 career mark.

Raanta, a career backup, won 15 games last season, marking the sixth time he earned double-figure victories. This season, he is 3-0-1 with a 2.42 GAA that is in line with his 2.46 career mark.