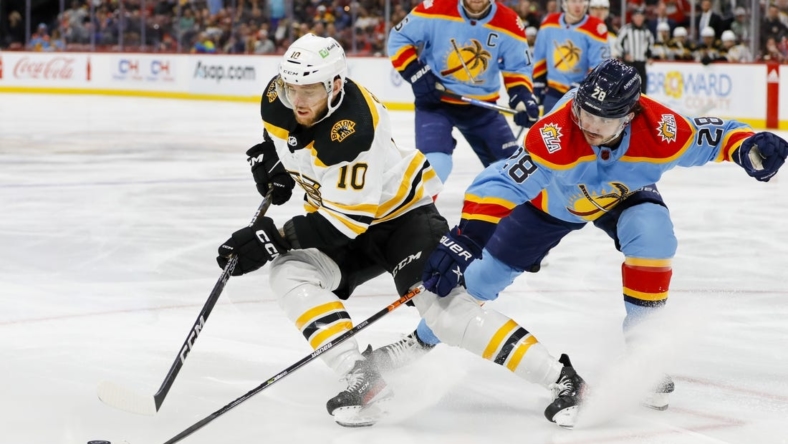 Aleksander Barkov and Aaron Ekblad each posted one goal and two assists as the host Florida Panthers cooled off the Boston Bruins 5-2 on Wednesday night in Sunrise, Fla.

Florida went 3-for-7 on its power play. Boston went 2-for-6 with the man advantage, with both of Boston’s power-play goals coming with 5-on-3 advantages.

The Bruins, who had their seven-game win streak snapped, were limited to goals by Charlie McAvoy and David Pastrnak. It marked just the third loss all season for the Bruins at 17-3-0.

Florida also received goals from Sam Reinhart, Anton Lundell and Matthew Tkachuk. For Ekblad, his empty-netter was goal No. 100 for his career.

Panthers backup goalie Spencer Knight made 38 saves to improve his record to 6-3-1.

Boston outshot Florida 19-9 in a first period that featured one power-play goal for each team.

Florida scored first as Reinhart and Tkachuk executed a pretty give-and-go with just 1:49 expired in the game. By the time Reinhart got the puck back, all he had to do was tap it into the net.

Boston tied the score with 2:46 left in the first as McAvoy’s slap shot allowed the Bruins to cash in on their power play. Boston won the faceoff and got the puck to McAvoy, who let loose with his blast from the slot.

Florida took a 2-1 lead with 4:41 gone in the second. Reinhart’s pressure forced a turnover deep in Boston’s end, and Nick Cousins got the puck to Lundell for the goal.

The Panthers closed the second period with two more power-play goals, both on deflections. Barkov got the first on Brandon Montour’s primary assist. Tkachuk got the second on Barkov’s primary helper, and that goal came with just 14 seconds remaining in the period.

Boston cut its deficit to 4-2 on Pastrnak’s power-play blast, his 13th goal of the season, from the slot with 13:40 left in the third. Brad Marchand’s pass set up Pastrnak.

The Bruins appeared to score with 3:54 left, but the goal was immediately waved off due to a hand pass from Nick Foligno to Charlie Coyle.

Ekblad’s empty-net goal with 2:10 remaining put the game away.