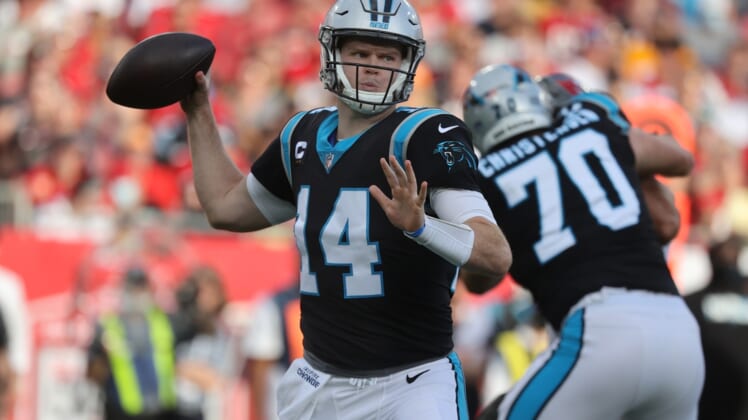 New Carolina Panthers offensive coordinator Ben McAdoo said Tuesday that Sam Darnold would be the team’s starting quarterback in 2022 before backtracking, acknowledging that he “just put my foot in my mouth.”

McAdoo, the former head coach of the New York Giants, made the comments during a Zoom interview with reporters after being asked if Darnold would be the Panthers’ starter.

“Sam is our starting quarterback, yes,” said McAdoo, who was hired in January to replace Joe Brady as OC.

McAdoo then backtracked, acknowledging that Carolina head coach Matt Rhule might have something to say about the team’s starter.

“One of the things I’ve been working on is being better talking to you people (media), so announcing the starting quarterback here I just put my foot in my mouth,” McAdoo said. “That wasn’t something I should have said.”

It was McAdoo’s first interview since being hired.

Darnold went 4-7 as the starter last season, his first in Carolina. He threw nine touchdowns against 13 interceptions. Darnold spent his first three seasons in New York after the Jets selected him No. 3 overall in the 2018 draft.

“Sam does have some magic in his game,” McAdoo said. “He’s got some athleticism to him. I’m excited to work with Sam. We’ve been working the last few days here to get up to speed on offense, and he’s shown flashes of being a good player in this league.”

McAdoo was the Giants’ offensive coordinator from 2014-15 and was named head coach in New York before the 2016 season. The Giants were 11-5 in 2016, but when they plummeted to 2-10 the following season, McAdoo was fired before his second season was over.

After he and New York parted ways, McAdoo worked as the quarterbacks coach with the Jacksonville Jaguars in 2020 and spent 2021 as a consultant with the Dallas Cowboys.