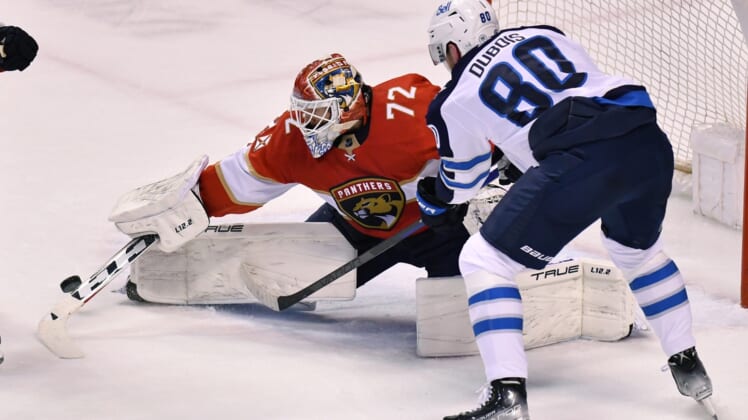 Jonathan Huberdeau had two goals and an assist as the Florida Panthers extended their winning streak to nine games with a 6-1 victory against the visiting Winnipeg Jets on Friday.

Huberdeau has 11 goals and 13 assists in a 13-game point streak, tied for the second-longest streak in franchise history.

Nikolaj Ehlers scored for the Jets (35-29-11, 81 points), who remained eight points behind the final wild-card spot in the Western Conference. Connor Hellebuyck gave up four goals on 26 shots before being replaced by Eric Comrie to start the third period. Comrie stopped 15 of the 17 shots he faced.

Winnipeg had recorded points in each of its previous three games (2-0-1).

Huberdeau opened the scoring at 2:03 of the first period on the Panthers’ first shot on goal. Giroux’s shot from above the circles hit the end boards and bounced to Huberdeau at the left of the net, and he converted for a 1-0 lead.

Huberdeau capitalized on poor defensive coverage by the Jets to make it 2-0 less than three minutes later. Giroux circled behind the net uncovered before coming out the left side and feeding an open Huberdeau at the right of the net at 4:47. The goal was his 30th of the season, matching his career high set in 2018-19.

Forsling made it 3-0 at 2:55 of the second period. Reinhart spotted the defenseman fresh out of the penalty box and sprung him for a breakaway, with Forsling lifting a backhander over Hellebuyck’s glove.

Forsling extended the lead to 4-0 at 16:21 of the second, scoring from the high slot after Huberdeau found him streaking into the zone right off the bench.

Ehlers got the Jets on the board at 1:08 of the third period when he picked up a loose rebound by the net.

Marchment pushed the gap to 5-1, kicking the puck from his skate to his stick at the right of the net and beating Comrie far side at 1:54 of the third.

Mamin slipped a backhand five-hole to make it 6-1 at 7:00 of the final period.