Panthers aim to turn things around vs. Senators 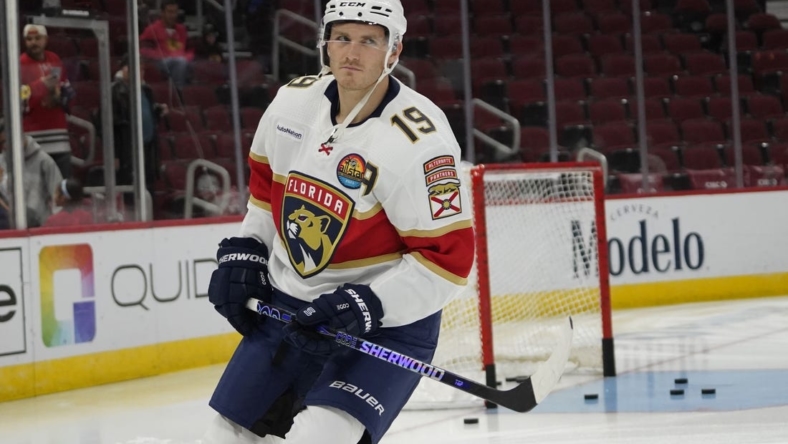 The Florida Panthers, who had the best regular-season record in the NHL in 2021-2022, have hit a dry spell, losing two straight games and three of their past four.

On Saturday, the Panthers will look to get back on track against the visiting Ottawa Senators in Sunrise, Fla.

Florida is coming off a 4-3 road loss to the Philadelphia Flyers in which Flyers goaltender Carter Hart stopped 47 of 50 shots on goal.

“Every once in a while you have one of these,” first-year Panthers coach Paul Maurice said. “This is our test now. Lost a couple in a row, but boy, that’s a fine game we played there. We should be proud of it.”

When it comes to the Senators and Panthers, home is where the wins are — at least so far.

The Panthers are being led by Matthew Tkachuk, their major offseason acquisition. Tkachuk tops Florida in goals (four) and assists (six).

But team captain Aleksander Barkov is in a slump. Barkov has five assists but no goals after scoring a career-high 39 last season. He has gone 12 straight games without scoring a goal, including the four-game sweep the Panthers were dealt last season against the Tampa Bay Lightning.

With Barkov struggling, role players Eetu Luostarinen (three goals) and Colin White (two goals) have found the back of the net at an accelerated rate. Last season, those two players combined for just 12 goals.

On defense, without the injured Aaron Ekblad — who is expected to miss another month — the Panthers have received more than expected from Gustav Forsling (six points) and Brandon Montour (five points).

As for the Senators, one of their top forwards is Brady Tkachuk, 23, the brother of Matthew Tkachuk, 24.

Brady Tkachuk, a 6-4, 212-pounder, has 10 points (five goals, five assists), which ties him with his brother for the season.

“When I was younger, (Matthew) would win everything,” Brady Tkachuk said. “He was so much bigger. But he can’t push me around any longer.”

The Senators haven’t been pushed around lately, either, winning four of their past five games. Drake Batherson leads Ottawa in assists (seven) and is tied with Tkachuk for the team lead in points.

Alex DeBrincat, who scored a career-high-tying 41 goals last season, is off to a bit of a slow start with just two tallies. However, he has at least one point in six straight games.

Like the Panthers, the Senators are getting contributions from unexpected sources. Fourth-line rookie Mark Kastelic was impressive in training camp, earning a two-year contract extension on Thursday.

“I attribute a lot of my success to work ethic,” said Kastelic, a former fifth-round pick who has two goals in seven games.

The Senators are dealing with two key injuries. Goalie Cam Talbot is back practicing, but he has yet to make his 2022-2023 debut. Last season, he went 32-12-4 with a 2.76 goals-against average for Minnesota.

Ottawa’s other key injury is to center Josh Norris, who is out due a shoulder ailment and could miss the rest of the year. He scored 35 goals last season.