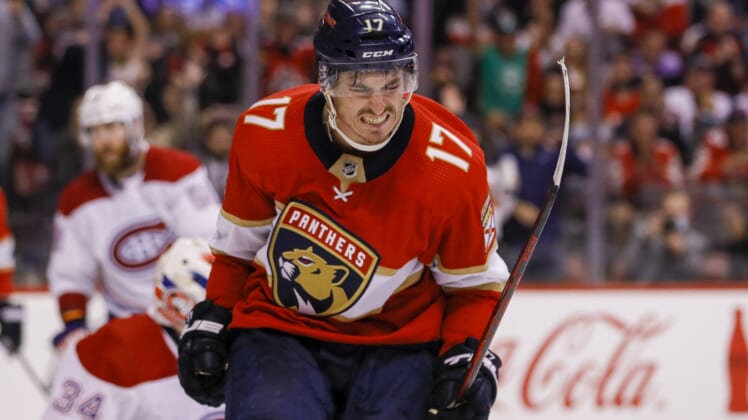 The Florida Panthers will look to keep their high-octane offense churning on Thursday when they host the Chicago Blackhawks in Sunrise, Fla.

The Panthers have scored a franchise-record 268 non-shootout goals this season after posting a 7-4 victory over the Montreal Canadiens on Tuesday.

Florida’s Jonathan Huberdeau tied the NHL record for assists in a season by a left wing with his 70th on Tuesday. Huberdeau also scored two goals on Tuesday to boost his season total to 93, breaking his previous career high of 92 set in 2018-19.

Meanwhile, Chicago is coming off a 6-5 home loss to the Buffalo Sabres on Monday. The Blackhawks coughed up a four-goal lead in the second period.

The Panthers have won 45 games this season, two short of the franchise record set in 2015-16.

Panthers goalie Sergei Bobrovsky earned his 32nd win of the season on Tuesday. He is three victories from tying the club record of 35, a feat accomplished twice by Roberto Luongo. Bobrovsky is 20-3-0 at home and 32-6-3 overall.

One of the magical aspects of Florida’s success this season has been its superlative depth. For example, fourth-line forward Ryan Lomberg recorded his first career two-goal game on Tuesday.

Lomberg had started the day with just eight career goals, but his energy routinely inspires his Panthers teammates.

“I’m not surprised,” Huberdeau said of Lomberg’s scoring. “In practice, he scores goals. Now he’s picking corners (of the net).”

Panthers coach Andrew Brunette shuffled his lines by necessity on Tuesday after forward Noel Acciari went out due to an upper-body injury.

That allowed Lomberg, at times, to play with stars such as Huberdeau and captain Aleksander Barkov, who leads the Panthers with 29 goals.

“He was the heartbeat of the group (Tuesday night),” Brunette said of Lomberg. “He’s got skill. He’s good with the puck, and he has intangibles.”

As for Florida’s next challenge, the Blackhawks have several stars to watch, including forwards Patrick Kane, Alex DeBrincat, captain Jonathan Toews, Dylan Strome and Dominik Kubalik.

Kane leads Chicago in assists (58) and points (79). DeBrincat leads Chicago with 38 goals, which is three short of his career high.

Strome has 19 goals, one short of his career high.

The Blackhawks are riding goaltender Kevin Lankinen, who is in his second year in the NHL. He is just 4-9-5 with a 3.63 goals-against average and an .886 save percentage this season.