Winners and losers from the Packers Sunday Night Football victory over the New Orleans Saints during NFL Week 3. 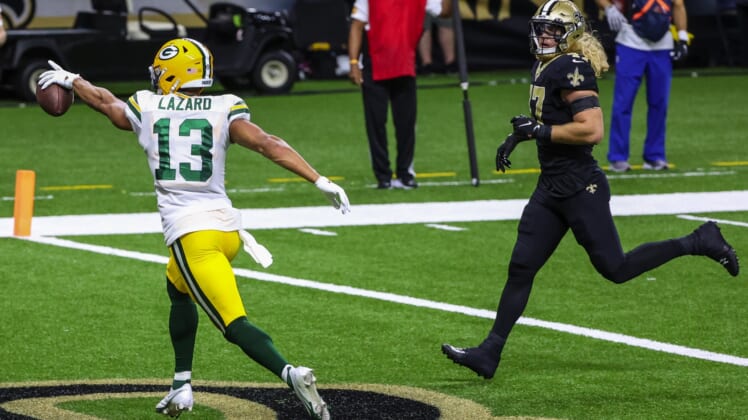 The Green Bay Packers are now one of eight undefeated teams around the NFL following Sunday’s Week 3 action. Their latest win was among the most-impressive we’ve seen from Aaron Rodgers and Co. in some time.

Taking on a Saints squad reeling from a Week 2 loss to the Raiders, Green Bay pretty much controlled the momentum on “Sunday Night Football.”

Aaron Rodgers threw three touchdowns while being protected by his offensive line at a high level. Allen Lazard stepped up big time with Davante Adams sidelined to injury. Meanwhile, Green Bay limited what Drew Brees did down the field in a 37-30 win.

Here are our biggest winners and losers from the Packers’ seven-point victory over New Orleans Sunday night.

A former undrafted free agent out of Iowa State, Lazard stepped up big time with Adams missing some action as a sophomore in 2019. He caught 35 passes for 477 yards while hauling in north of 67% of his targets. Thus far this season, it’s been pretty much the same case. He tallied 108 yards in the first two games. With Adams sidelined Sunday evening to a hamstring injury, Lazard played out of his mind.

It wasn’t simply about that 72-yard catch. Lazard was consistently good against New Orleans. He hauled in 6-of-8 targets for 146 yards, providing Rodgers with the threat he needed on the outside in Adams’ absence. This kid is good.

Some of this could have to do with Drew Brees’ struggles getting the ball down the field. That was apparent in Week 2’s loss to the Raiders, too. However, the inability of receivers to step up in Michael Thomas’ stead continues to have an impact on the Saints’ success on offense. That was true Sunday night against Green Bay.

Emmanuel Sanders and Tre’Quan Smith combined to haul in eight passes for 98 yards. Most of those came late in the game with New Orleans forced to abandon the run. The Saints’ leading receiver in this one was Alvin Kamara (more on him later). We’re not 100% sure how sustainable this is moving forward. Perhaps, general manager Mickey Loomis looks to add a reinforcement ahead of the Nov. 3 NFL trade deadline.

It wasn’t too long ago that Aaron Rodgers was victimized by brutal offensive line play in front of him. The future Hall of Famer was sacked a combined 85 times in 2018 and 2019. That’s despite the utter brilliance of left tackle David Bakhtiari. Thus far this season, the offensive line has been tremendous. That continued Sunday night against the Saints.

Rodgers was hit a total of three times and sacked one time on 34 drop backs. This enabled him to eat apart a Saints secondary that struggled big time against Derek Carr and the Las Vegas Raiders last week. Through three games, Rodgers has been sacked a grand total of two times. If this keeps up, Green Bay is going to be hard to beat moving forward.

Loser: Drew Brees struggles to get the ball down the field

The future Hall of Famer’s stat line was great Sunday evening. Brees completed 29-of-36 passes for 288 yards with three touchdowns and zero interceptions in the losing effort. It’s pretty much the same thing we saw from the 13-time Pro Bowler last week against the Raiders.

Unfortunately, it’s not all about the stats. Once again, Brees was forced to rely on yards after the catch to rack up those totals. For a second consecutive week, the 41-year-old quarterback failed to complete a ball that traveled more than 20 yards down the field. It’s rather obvious that Brees’ arm is nowhere near what it was earlier in his career. How this turns out moving forward on the season will be telling.

Some were concerned about Kamara’s lack of usage last season for the Saints. It seemed to suggest that something might have been up with the former NFL Offensive Rookie of the Year. Months after the season ended, it was noted that Kamara had been dealing with injuries throughout the campaign. If the first three weeks of the 2020 season are any indication, Kamara is completely healthy.

Including that absurd 52-yard catch and run, the former Tennessee standout tallied 197 total yards on 19 touches in a brilliant overall performance. It was much needed with Drew Brees still struggling to throw down the field and with Michael Thomas sidelined to injury.