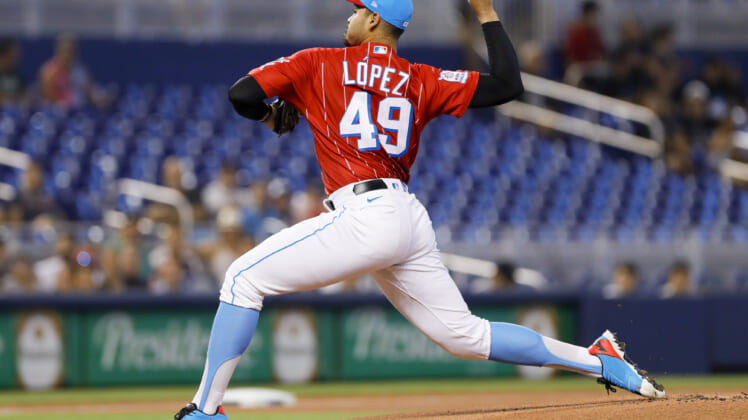 The latest MLB trade rumors make it clear, the Miami Marlins are fielding trade offers on just about everyone on their roster and that includes All-Star pitcher Pablo López. At a time when MLB postseason contenders are desperate for front-line pitching, a López trade could net a massive haul.

Miami is taking the right approach to the trade deadline. It’s excessive wealth of starting pitching, even after the Max Meyer injury, means they have too many arms and only a few rotation spots. With one of the worst lineups in MLB dragging this team down, the Marlins have to use their wealth of pitching to find a bat.

While López isn’t the best starting pitcher available – behind Luis Castillo – his contract adds to his value. Both clubs with large payrolls and those planning to contend in 2023 view López as the perfect starter to add as a long-term fixture of their pitching staff without eating up payroll.

It’s no secret that the St. Louis Cardinals need starting pitching. Acquiring Juan Soto is believed to be atop the team’s wishlist, but that requires significant payroll commitments. Fortunately, the depth of the Cardinals’ roster and farm system could allow them to acquire both Soto and Lopez.

For now, we focus on the pitcher. Miami will likely prioritize MLB talent or prospects on the verge of sliding into an everyday lineup. O’Neill, not far removed from being a top prospect, is owed just $3.4 million and is under team control through 2024. He could certainly fit as a key piece in a deal.

Using the Baseball Trade Values calculator, it works out to a +3.3 value gain for Miami, meaning it’s an even move for both sides at the deadline. Fans might not love the idea of moving Herrera, especially given the uncertainty at the position in 2023. However, this provides St. Louis with a No. 2 starter until 2025 and he won’t cost as much as Luis Castillo or a top arm in free agency.

It also is worth mentioning why Castillo fits so nicely in St. Louis. He boasts one of the highest groundball rates (47.4%) in the majors this season and he does an excellent job commanding the strike zone. With a great defense behind him, there’s no reason to think he won’t maintain a sub-3.4 ERA.

The Baltimore Orioles are the biggest surprise in baseball this season. Expected to finish near the bottom of the MLB standings. Instead, the O’s could be long-term buyers at the deadline. They have a stockade of young hitters, but pitching is a weak point. It’s what makes the Marlins and Orioles ideal fits.

Austin Hays is arbitration-eligible through the next three seasons and would instantly provide Miami with a reliable corner outfielder capable of delivering a .750-plus OPS every year. That immediately helps the Marlins. Of course, Hays alone likely won’t be enough.

Coby Mayo’s raw power is outstanding, offering him the potential to hit 30-plus homers a year. There are tweaks that need to be made and he is struggling at the plate this year, but the physical tools are there for him to hit .240-plus with 30 home runs in his prime years. In addition, Miami buys low on Heston Kjerstad (No. 2 overall pick in 2020 MLB Draft) as he works his way back from a myriad of medical issues.

This is an expansive deal and with the prospect capital Baltimore sacrifices, it requires a bit more from Miami. As a result, the Orioles roll the dice on Jake Eder after Tommy John Surgery, hoping he either becomes a starter or a dominant lefty reliever.

If the Toronto Blue Jays can emerge from the trade deadline with a reliable starting pitcher and a late-inning bullpen arm, they will be very happy. Adding the right pieces might be the difference between an ALDS trip or potentially winning the World Series. Thus, there is a possibility for a deadline blockbuster.

López would immediately step in as Toronto’s No. 3 starter, creating an outstanding playoff rotation with Kevin Gausman and Alex Manoah. It also pushes José Berríos down into becoming the No. 4 starter, meaning there is less pressure on him to perform in what can only be described as a disastrous season. López would also greatly benefit from having an infield defense featuring Matt Chapman and Santiago Espinal behind him.

Anthony Bass would also strengthen Toronto’s bullpen. The 34-year-old reliever is dominating for Miami this season, recording a 1.48 ERA with a 0.94 WHIP and .204 batting average allowed in 42.2 innings. Serving as the bridge to Jordan Romano, the Blue Jays could feel even more confident in their ability to contain high-scoring lineups in the playoffs.

As for the Marlins, there are multiple benefits to the trade package received in this proposal. Danny Jansen would help Miami’s young starters behind the plate and he’s a better hitter than Jacob Stallings. In addition, the Marlins can have Groshans as their everyday third baseman in 2023.