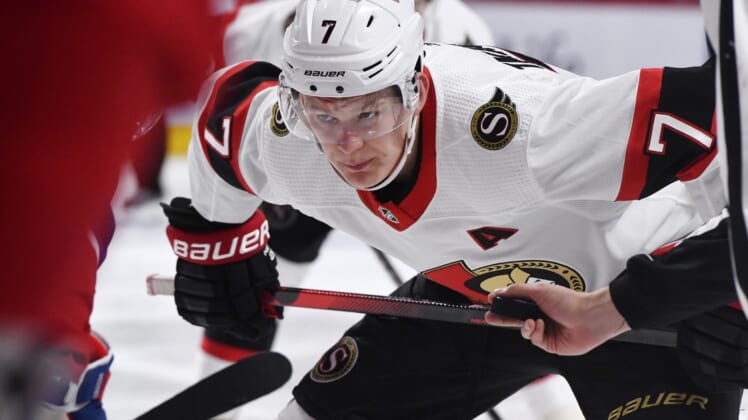 May 1, 2021; Montreal, Quebec, CAN; Ottawa Senators forward Brady Tkachuk (7) prepares for a face off against the Montreal Canadiens during the third period at the Bell Centre. Mandatory Credit: Eric Bolte-USA TODAY Sports

He had been holding out and didn’t appear in any preseason games. It’s unclear when he’ll be ready to join the Senators, who open their season Thursday night against the Toronto Maple Leafs.

“We’re thrilled to come to a long-term agreement with Brady,” Senators owner and governor Eugene Melnyk said. “He’s a valuable member of our leadership group, is universally respected by his teammates and a player we’re certain will have a significant impact on our success in the seasons ahead.”

“This is an exciting day for the Ottawa Senators,” Senators general manager Pierre Dorion said. “Brady possesses a very dynamic skill set and is a prototypical power forward in today’s NHL. He scores goals, he plays physical and exemplifies what it means to be a pro for all players in our organization.”

Tkachuk is the younger brother of Calgary Flames forward Matthew Tkachuk and son of Keith Tkachuk, who scored 538 career goals during his 18-year NHL career.