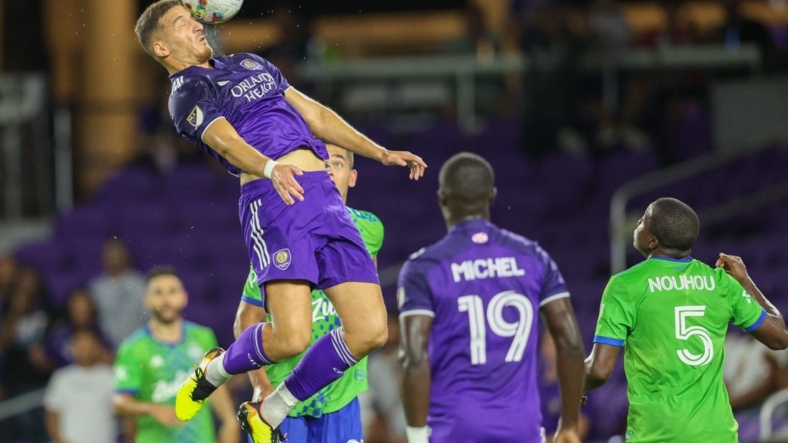 Kyle Smith’s deflected shot in the first minute of second-half stoppage time completed Orlando City’s comeback from two goals down to a 3-2 victory over the visiting Seattle Sounders on Wednesday night.

Ercan Kara scored his team-leading ninth goal of the season from the penalty spot as Orlando (12-10-6, 42 points) won a fourth consecutive game and a third straight with a game-winning goal in the 89th minute or later.

Facundo Torres added his sixth of the season to begin fifth-place Orlando’s comeback in the 53rd minute and help the Lions move seven points clear of the Eastern Conference playoff line.

Raul Ruidiaz scored his seventh goal of the season and his second in three games for Seattle (10-15-3, 33 points), which is now winless in its past five.

Seattle’s Albert Rusnak scored his third goal of the season on an exceptional free kick early on, but he couldn’t help the Sounders from slipping deeper into jeopardy of missing the postseason for the first time since joining MLS in 2009.

Torres pulled a goal back for Orlando moments after Ruidiaz made it 2-0 with a thunderous strike from distance that left goalkeeper Pedro Gallese little chance.

Then after Orlando’s Mauricio Pereyra missed an earlier penalty kick, the Lions capitalized on their second when Jordan Morris was correctly spotted for a handball inside the penalty area.

This time Kara drove a powerful finish past Frei.

Both teams had chances after that, but it took a fortunate deflection to decide it.

Smith took Torres’ pass on the right side of the penalty area, cut into the box and unleashed a shot that may have been heading wide of the far post.

Instead, it redirected off a Seattle defender and past Frei. The play was originally waved off because the linesman thought Kara had interfered with the goal from an offside position, but that decision was overturned following video review.

Rusnak gave the visitors the lead in the 26th minute after Ruidiaz earned a free kick by inducing Antonio Carlos into a foul about 28 yards from goal.

Orlando let in a second seven minutes into the second half when Ruidiaz reached the rebound of Morris’ low cross off Gallese and poked it over the line from very close range.