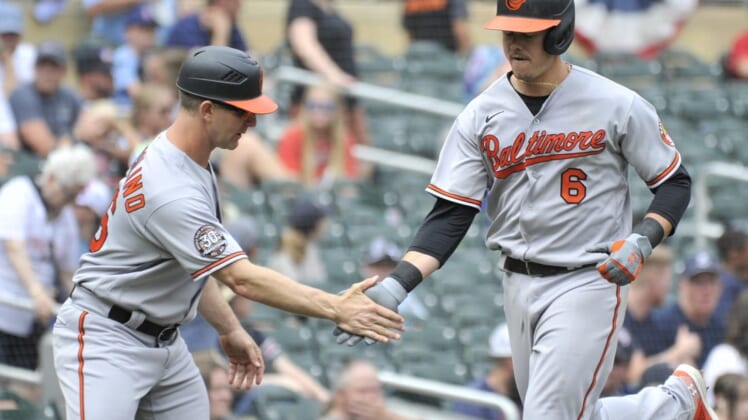 Ryan Mountcastle homered and doubled and Tyler Wells won his fifth consecutive start as the Baltimore Orioles snapped a four-game losing streak with a 3-1 victory over the Minnesota Twins on Sunday afternoon in Minneapolis.

Trey Mancini and Rougned Odor also homered for the Orioles, who also ended a 12-game losing streak at Target Field dating back to July 9, 2017.

Wells (7-4), a 15th round pick by Minnesota in the 2016 draft who later moved on to Baltimore in the Rule 5 Draft in 2020, carried a no-hitter into the fifth inning for the second straight game and allowed three runs or less in his 15th consecutive start. He left after allowing one run on three hits and a walk over six innings while striking out a career-high seven.

Dillon Tate struck out two while pitching a 1-2-3 ninth for his second save of the season as Baltimore finished its 10-game road trip with a 5-5 record.

Devin Smeltzer (4-2) suffered the loss, allowing three runs on six hits in six innings. He walked one and struck out three.

Baltimore took a 1-0 lead in the fifth inning when Odor led off with his eighth home run of the season, a 408-foot drive to right-center.

The Orioles extended their lead to 3-0 in the sixth when Mancini and Mountcastle homered on back-to-back pitches to open the inning. The eighth homer of the season for Mancini traveled into the second deck in left while Mountcastle lined his 14th home run of the season 360-feet line just inside the left field foul pole.

The Twins cut it to 3-1 in the bottom of the sixth. Gilberto Celestino led off with a walk, advanced to second on a single by Luis Arraez and took third when Carlos Correa grounded into a double play. Jorge Polanco then drove in Celestino with a single to right.