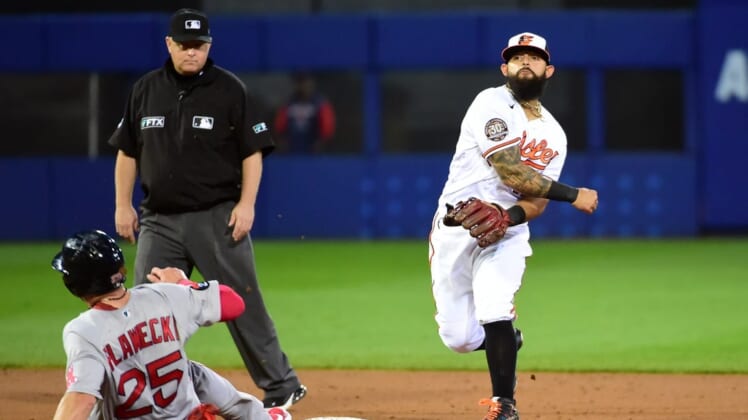 Jorge Mateo’s three-run double in the bottom of the eighth inning lifted the Baltimore Orioles, who were playing as the hosts, past the Boston Red Sox 5-3 in the fifth annual Little League Classic on Sunday night in Williamsport, Pa.

Baltimore’s Ramon Urias walked against Matt Barnes (0-4) with one out in the eighth. John Schreiber came in for Boston and hit the first batter he faced, Austin Hays, putting runners on first and second before Rougned Odor walked on four pitches to load the bases.

Mateo, nearly hit by a 1-1 pitch, smacked a 2-1 offering just inside third base and down into the corner, clearing the bases to make it 5-2.

Cionel Perez (7-1) pitched the eighth inning for the win and Felix Bautista pitched the ninth for his eighth save after allowing a leadoff homer to Xander Bogaerts.

Anthony Santander had three hits for the Orioles, who took two of three from Boston.

Red Sox pinch hitter Franchy Cordero tied the score 2-2 with a leadoff homer against Dillon Tate in the eighth.

Dean Kremer started for Baltimore and allowed a run on five hits over 5 1/3 innings. He struck out four and walked two.

Cedric Mullins led off the home half of the first with a single, went to second on Adley Rutschman’s single and scored on Santander’s base hit. Rutschman went to third on a flyout and scored on an infield hit by Urias to make it 2-0.

The Red Sox got a run back in the second. Rafael Devers singled and J.D. Martinez walked. Christian Arroyo hit into a double play, and Devers went to third and then scored on an Enrique Hernandez single.

Santander singled with two outs in the seventh and went to second on a wild pitch, but Ryan Mountcastle grounded out to snuff the threat.